Lok Sabha Elections Phase 3: Mohd Zubair, the polling officer, was removed from the booth number 231 in Moradabad's Billari after the incident. 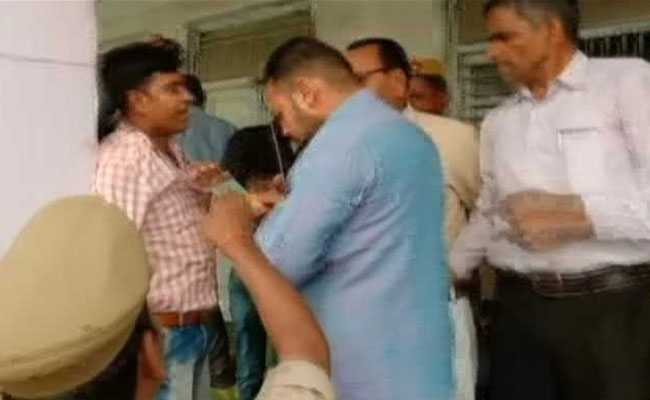 The polling officer was beaten up at a voting booth in Moradabad.

A polling officer was beaten up this morning at a voting booth in Uttar Pradesh's Moradabad by BJP workers who alleged that he forced some women to vote for the Samajwadi Party, said police.

Mohd Zubair, the polling officer, was removed from the booth number 231 in Moradabad's Billari after the incident. The BJP workers alleged he was pressurising women to press "cycle", the voting symbol of Akhilesh Yadav-led Samajwadi party.

In a video shared by news agency ANI, the polling officer is being thrashed as cops intervene and take him out of the voting booth.

Some voters in Etah district also alleged they were forced to vote for the Samajwadi Party, according to news agency IANS. A polling agent, Yogesh Kumar, has been reportedly taken off duty.

However, Samajwadi chief Akhilesh Yadav in a tweet alleged "EVMs malfunctioning across India are voting for the BJP."  He shared a report of malfunctioning of voting machines and called it "criminal negligence for a polling exercise".

"EVMs across India malfunctioning or voting for the BJP. DMs say poll officials untrained to operate EVMs. 350+ being replaced. This is criminal negligence for a polling exercise that costs 50,000 crs. Should we believe DMs @ECISVEEP,  or is something far more sinister afoot? (sic)" the Samajwadi chief tweeted.