Hundreds of BJP supporters danced in front of the truck on which Smriti Irani, Yogi Adityanath and other BJP leaders held the roadshow.

A day after Congress president Rahul Gandhi filed his nomination in Uttar Pradesh's Amethi, preceded by a grand roadshow that featured thousands of party workers, his BJP rival Smriti Irani put up an equally impressive display as she took the same route to file her nomination.

Smriti Irani covered the same distance as Rahul Gandhi did yesterday - 3 km - to the election office in Gauriganj. The Union Minister was joined by Uttar Pradesh Chief Minister Yogi Adityanath.

Hundreds of BJP supporters, many of them drawn from neighbouring districts and almost all of them wearing "Main Bhi Chowkidaar" T-shirts and saffron turbans, led the roadshow through the narrow streets. Many of them danced in front of the truck.

The main draw was saffron-robed Yogi Adityanath, who, interestingly, did not accompany the union minister inside the nomination centre.

Around 60 km away, UPA (United Progressive Alliance) chairperson Sonia Gandhi too held a grand roadshow in Raebareli on her to way to file her nomination.

Smriti Irani and her husband Zubin had earlier performed elaborate rituals before going to the District Magistrate's office. 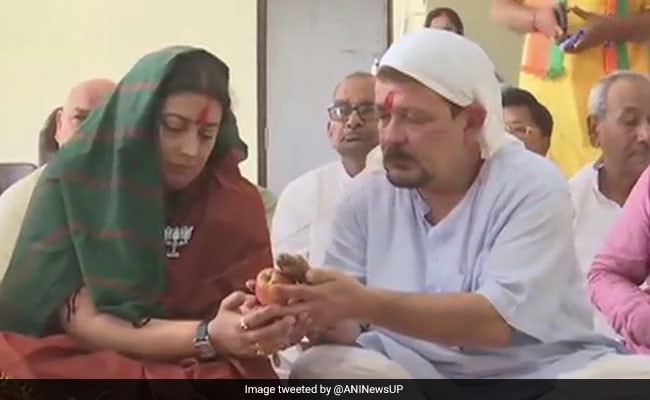 Ms Irani was to file her nomination on April 17, but due to a holiday on that day (Mahavir Jayanti), she changed the date, local BJP leader Durgesh Tripathi said.

In 2014, Smriti Irani lost to Rahul Gandhi but reduced his margin of victory in a Gandhi family stronghold. In the past five years, she has repeatedly visited Amethi, a largely rural constituency around 130 km from Lucknow, and launched central government projects like the assault rifle manufacturing unit for which the foundation stone was laid last month by PM Modi.

Ms Irani's narrative has been to highlight the Congress leader's "neglect" of the constituency. Rahul Gandhi's decision to contest from a second seat - Kerala's Wayanad - proves that he is afraid of being punished by voters, the BJP says.

The Congress has rubbished the BJP's allegation, calling the Wayanad move a big southern outreach.

"Do not support those who dream of disintegrating the country and dividing the society. This will weaken the country," she said yesterday.

"Amethi has given me respect as an elder sister and not as a candidate. I believe that serving Amethi is my param dharam (prime duty). All you should be cautious of the Congress," she added.

"People who are out on bail and accompanied by those neck-deep in corruption, are seeking an account of the army's action," she said, targeting the Congress over the Balakot strike debate.

Amethi goes to polls in the fifth phase, on May 6. It has four assembly segments - Tiloi, Gauriganj and Jagdishpur (reserved) in Amethi district and Salon (reserved) in Raebareli.