Lok Sabha Elections Voting Phase 3: After casting his vote at the booth in Naranpura area of Ahmedabad city, which comes under the Gandhinagar Lok Sabha constituency, he appealed to people to come out in large numbers 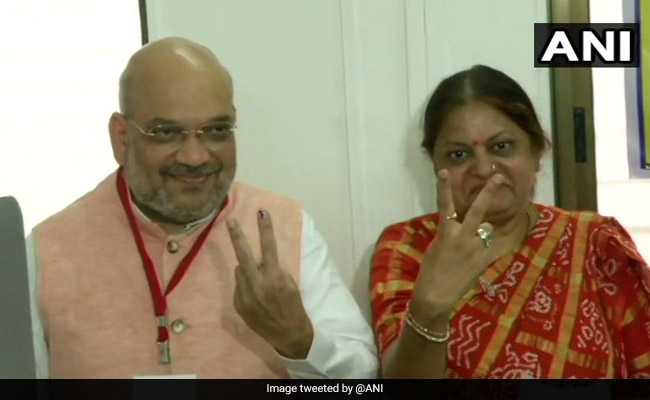 BJP president Amit Shah, who is contesting the Lok Sabha poll from Gandhinagar seat in Gujarat, cast his vote in Ahmedabad on Tuesday and urged people to exercise their democratic right for ensuring the country's security and boosting the economy.

After casting his vote at a polling booth located in Naranpura area of Ahmedabad city, which comes under the Gandhinagar Lok Sabha constituency, he asked people to participate in "this festival of democracy". His wife Sonal Shah accompanied him.

"There is great enthusiasm among voters for the third phase of Lok Sabha polls across the country. I have learnt that people are also participating with enthusiasm in all 26 seats in Gujarat," he said.

"It is my appeal to the youth as well as first-time voters that you need to vote for building India''s future. You should vote for ensuring the security of the country and to boost the economy," he added.
After casting his vote, the senior BJP leader offered prayers at the Kameshwar Mahadev Temple located near the polling booth.

Earlier, Mr Shah accompanied Prime Minister Narendra Modi who he went to cast his vote at a polling booth set up at a school in Ranip area of the city.

Polling in all 26 Lok Sabha seats of Gujarat is being held in a single phase on Tuesday.