Lok Sabha elections 2019: RLSP chief Upendra Kushwaha said, "I have seen it very closely. I was with the NDA. The BJP is different from what it is inside and what it is outside" 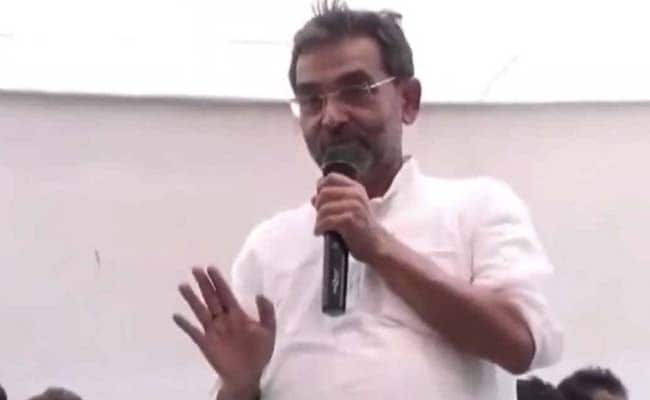 Rashtriya Lok Samata Party chief Upendra Kushwaha walked into a potential minefield today with comments against the BJP, drawn from what he claimed was his experience as a former partner of the National Democratic Alliance.

"I have seen it very closely. I was with the NDA. The BJP is different from what it is inside and what it is outside," Mr Kushwaha was seen saying in a video of a rally at Bihar's Darbhanga, tweeted by news agency ANI.

Then he proceeded to explain the BJP's "dual faces" with what he considered an example. "People of this area are fond of Ram Leela and they will know. During Ram Leela, when the person who plays Sita ji comes on the stage, everyone bows with respect. But if you went backstage and pulled up the curtain, you would see the same Sita ji is having a cigarette. This is the face of the BJP," Mr Kushwaha, in a white kurta and mic firmly clasped in both hands, is heard saying in the video, drawing loud cheers from his supporters.

"It's all corrupt inside," he continues, "but outside it takes the form of a god. They put the godly face in front people but I have seen the face with the cigarette when I was in the NDA."

#WATCH Upendra Kushwaha, RLSP in Darbhanga: In Ram leela when the curtain rises a person comes dressed as Sita mata.....people who watch Ram leela bow their heads out of respect, if you go behind curtain the same Sita ji can be seen smoking a cigarette. This is the face of BJP. pic.twitter.com/2Z1wepXCcH

The RLSP chief quit the government led by Prime Minister Narendra Modi and exited the BJP-led NDA in December last year, after months of airing his growing resentment with the ruling party and its seat-share deal with another ally, Nitish Kumar, for the national election.

"I stand dejected and betrayed by your leadership," Mr Kushwaha had said in a letter to PM Modi.

"You have systematically dismantled the functioning of the cabinet that is mandated in the Constitution. The union cabinet has been reduced to a mere rubberstamp, simply endorsing your decision without any deliberation. Ministers and officers posted in ministries have become figureheads as virtually all decisions are taken by you, your office and the BJP president," the former union minister had said in his resignation letter.