Tej Pratap has been unhappy for some time and often it has been about an ego battle with his brother, who is the Leader of Opposition and is Lalu Yadav's preferred political successor. 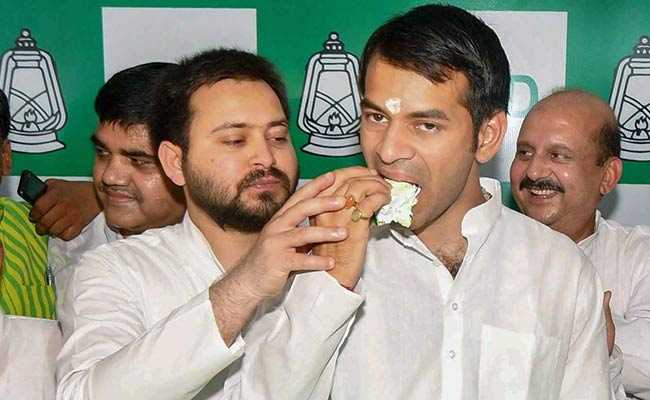 Just before the national election, the feud within Bihar politician Lalu Yadav's family has boiled over again. The RJD chief's older son, Tej Pratap Yadav, seen to be less politically gifted than his younger brother Tejashwi Yadav, tweeted his resignation from a party post today.

"I am resigning from the post of RJD's student wing. Naive are those who think I am naive. I know exactly who stands where," Tej Pratap Yadav said in a tweet in Hindi.

Tej Pratap, 30, has been unhappy for some time and often it has been about an ego battle with his brother, who is the Leader of Opposition and is Lalu Yadav's preferred political successor.

Sources say Tej Pratap's latest move is a pressure tactic as the RJD prepares to announce its list of candidates in 40-seat Bihar for the national election starting April 11. Tej Pratap wants his close aides on that list.

Some sources believe the reason is that his estranged father-in-law Chandrika Rai is being fielded from the crucial Chhapra seat. Both Lalu Yadav and Tejashwi reportedly want Mr Rai, an eight-time legislator, to contest from there. But Tej Pratap, who has filed for a divorce, is dead against it.

Tej Pratap's critics accuse him of being a compulsive attention-seeker. He had a stint in Bhojpuri films and has a weakness for cosplay - he is known to dress up as Lord Krishna during festivals.

Being denied a post as high-profile as Tejaswi's rankled, and Tej Pratap let off steam with his frequent "revolts". These were followed by family photo-ops like the brothers feeding each other sweets, or posing with their mother, to demonstrate "All is Well".

Within the party, Tej Pratap is known for his erratic temper. Tejashwi is the preferred go-to.

This is not his first controversial tweet. Tej Pratap is known to blame posts on "hacking" after a dispute is resolved within the family.