Lok Sabha elections 2019: Unlike the Uttar Pradesh opposition club of Akhilesh Yadav and Mayawati, Tejashwi Yadav appealed to a crowd at Samastipur to vote for Rahul Gandhi as their prime minister 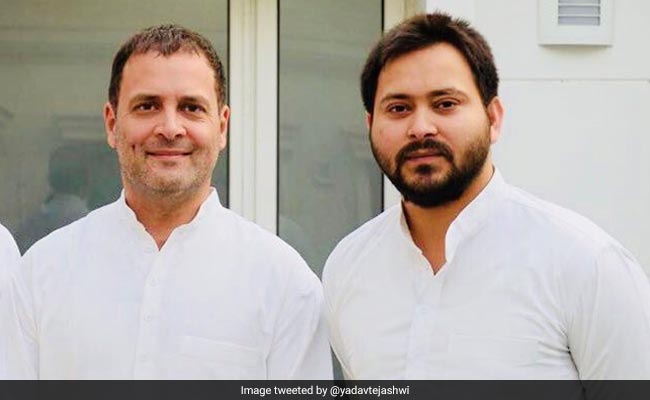 Allies Rahul Gandhi and Tejashwi Yadav, the leader of the RJD, finally shared a stage in Bihar on Friday, well into the national elections and just before the fourth round of voting. Tejashwi Yadav, who had skipped several rallies of the Congress president over the past few weeks, more than made up with his ringing endorsement of Rahul Gandhi for the post of Prime Minister.

Unlike the Uttar Pradesh opposition club of Akhilesh Yadav and Mayawati, Tejashwi Yadav appealed to a crowd at Samastipur to vote for Rahul Gandhi as their prime minister.

"Please make Rahul ji Prime Minister as not only does he talk about the poor, he also doesn't have any problem meeting them, unlike our Prime Minister Narendra Modi who has time to attend Priyanka Chopra's reception but can't visit a poor man's home," said the younger son of Lalu Yadav, the jailed RJD chief.

Tejashwi also thanked Rahul Gandhi for his "NYAY" scheme, which, he said, would benefit more people from Bihar. "There is a difference between what PM Modi says and does, but Rahul ji always does what he says and without losing much time. Like the way he promised loan waivers and see how it was waived in those three states," he said.

On his part, Rahul Gandhi said the highest number of beneficiaries of his proposed NYAY scheme, which promises Rs 72,000 a year for India's poorest, would be from Bihar. He also promised that the middle class would not be taxed to finance the scheme.

Rahul Gandhi reached late to Samastipur as his plane had developed a snag and had to return to Delhi in the morning. He tweeted an apology along with a video taken by someone on the small plane. Samastipur will vote on Monday for the national election.

Tejashwi Yadav had skipped three previous rallies of Rahul Gandhi, which looked bad for the gathbandhan in Bihar.

Rahul Gandhi has addressed three meetings, including in Gaya for ally Jeetan Ram Manjhi, and two for Congress candidates Uday Singh in Purnea and Ranjeeta Ranjan in Supaul. Tejashwi Yadav was MIA for all three.

In contrast, the BJP and its allies are the happy, undivided family. Prime Minister Narendra Modi has shared the stage often with Bihar Chief Minister Nitish Kumar during the campaign though the two leaders have had a history of acrimony.