Rahul Gandhi Files Nomination From Wayanad, Sister Priyanka With Him

Lok Sabha Elections 2019: Rahul Gandhi's decision to contest from Wayanad bolstered the BJP's charge that he is "running away" because he is unsure of his prospects in Amethi.

Rahul Gandhi is contesting from Kerala's Wayanad which will vote on April 23 in the Lok Sabha polls.

Rahul Gandhi today filed documents to contest the national election from Kerala's Wayanad. He landed there by a helicopter this morning, along with his sister Priyanka Gandhi Vadra, and headed to the district collectorate office in Kalpetta.

A massive crowd of Congress workers and supporters carrying party flags greeted the brother-sister duo as they stood on a truck and waved at the crowd during their roadshow to mark the beginning of Rahul Gandhi's Wayanad campaign.

A marching band was part of the procession that took them to the government office. Heavy security was in place in and around the collectorate ahead of the high-profile visit of the Congress chief.

The Congress announced last weekend that its chief would contest from the hilly Kerala district in addition to the Amethi constituency in Uttar Pradesh that has voted him to parliament since 2004, his first election. 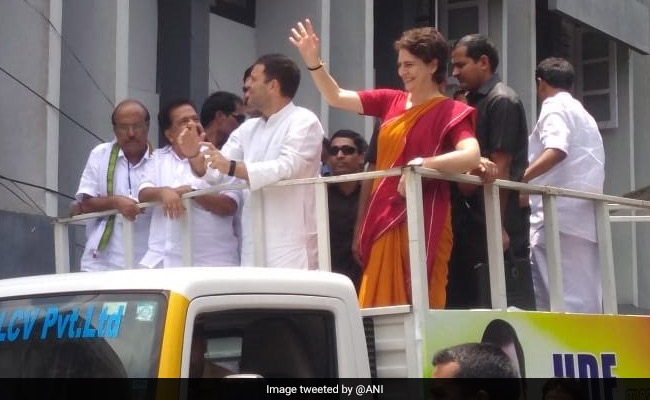 Lok Sabha Elections 2019: Rahul Gandhi and Priyanka Gandhi took out a roadshow after the Congress chief filed his nomination from Wayanad.

Mr Gandhi landed in Kozhikode, 73 km from Wayanad, on Wednesday night to a grand welcome by hundreds of Congress workers. Priyanka Gandhi, who joined the party in January as one of its general secretaries in charge of Uttar Pradesh, had reached shortly before her brother.

The Congress chief was received at the airport by former Kerala chief minister Oommen Chandy and other leaders of the Congress-led alliance in the state. Rahul Gandhi and Priyanka Gandhi spent the night at a guest house in Kozhikode.

The Congress president's decision to contest from a second seat bolstered the BJP's charge that Rahul Gandhi is "running away" because he is unsure of his prospects in Amethi, where he has been challenged by Union Minister Smriti Irani for the second time.

On Tuesday, he explained that he was fighting from Wayanad because: "South India feels hostility from Narendra Modi; I wanted to send message that I am standing with you."

He was responding to PM Modi saying at a public rally in Maharashtra that the Congress was "afraid" because it had insulted Hindus by using the term "Hindu terror" and knew it would be punished by the community. He implied that was the reason why Rahul Gandhi had decided to contest in Wayanad, where "the majority is in a minority".

Wayanad, a relatively backward region, is home to Kerala's largest tribal population. Eighteen per cent of the district's vote share is that of tribals.

The Congress says by choosing Wayanad, Rahul Gandhi will be contesting from a seat that, in a way, represents three southern states. Wayanad shares borders with Karnataka and Tamil Nadu.

The NDA coalition has fielded Thushar Vellapally of the Bharat Dharma Jana Sena to take on the Congress president.

Wayanad will vote on April 23 and Amethi on May 6. The counting of votes in the staggered national election will be held on May 23.