Last week, Pragya Thakur had said that Hemant Karkare was killed by terrorists during the Mumbai attacks because she put him under a curse for probing her involvement in the Malegaon blasts case. 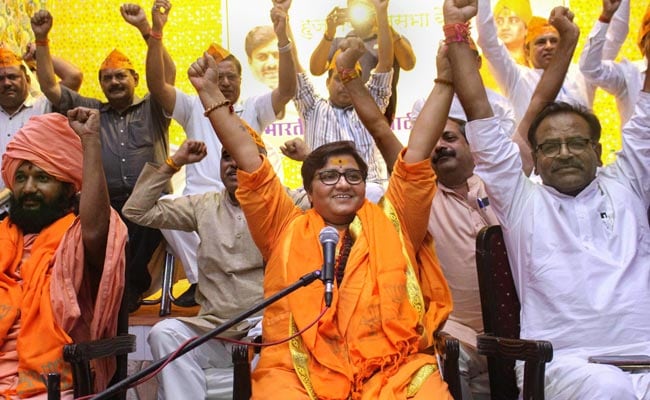 Pragya Thakur had earlier withdrawn her statement in the face of mounting protests.

BJP leader Pragya Singh Thakur today denied making any defamatory comment against 26/11 hero Hemant Karkare, claiming that she was simply describing how she was "tortured" under the previous Congress government over her alleged involvement in the Malegaon blasts case.

"I didn't pass defamatory comments against any martyr. I only described the torture inflicted on me on the orders of the then Congress government," news agency ANI quoted her as saying in her response to a show-cause notice issued by the Election Commission.

Last week, Pragya Thakur had said that Hemant Karkare was killed by terrorists during the 2008 Mumbai attacks because she put him under a curse for investigating her involvement in the Malegaon blasts case. The remark gave rise to a massive controversy, with many cutting across party lines condemning the denigration of a police officer who had laid his life down for the country.

"It's my right to put before the public what had happened to me... But I have already taken back my statement," Pragya Thakur said in her response, accusing the media of twisting her statement.

The BJP politician, who is contesting the ongoing Lok Sabha elections from Bhopal against the Congress' Digvijaya Singh, had earlier withdrawn her statement in the face of mounting protests. "I feel that enemies of the country were being benefited from my statement, and therefore I take it back and apologise," she told mediapersons then.

A former public prosecutor in the Malegaon blast case had criticised Pragya Thakur on Saturday, pointing out that her claims of torture had been shot down on various occasions. "First, a trial court found no evidence of torture or illegal detention in the case. So they (the accused) challenged the verdict in the High Court, which went through all the records - including medical reports - and rejected her appeal too," said Rohini Salian, who had excused herself from the case in 2015.

Eight former top police officers also condemned Pragya Thakur today, saying that it was disgraceful that she had dishonoured a celebrated officer who ditched a plum posting at the centre with the "specific intention" of fighting terror.

Bhopal will go to the polls on May 12, and the votes will be counted eleven days later.