Only PM Modi Can Give A Strong Government, Says Amit Shah

Addressing an election rally at Shamshabad near Hyderabad, Amit Shah also said the BJP's manifesto released Monday was nothing but a document to make the country great. 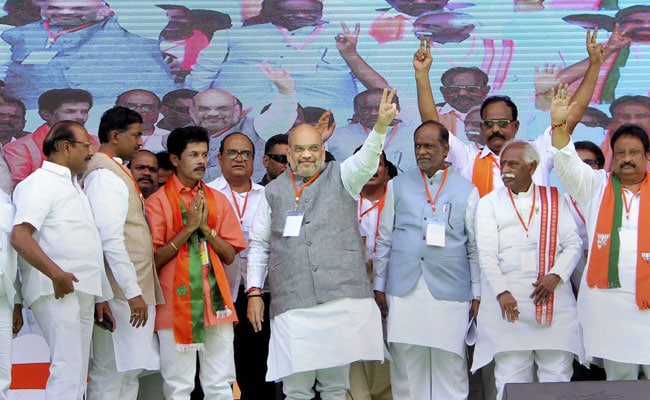 BJP President Amit Shah on Tuesday made a strong pitch for return of the party-led NDA government at the centre, saying only Prime Minister Narendra Modi can give a strong government.

Addressing an election rally at Shamshabad near Hyderabad, he also said the BJP's manifesto released Monday was nothing but a document to make the country great.

Referring to the Pulwama terrorist attack and subsequent air strike by India targeting terror camps in Pakistan, Mr Shah asked whether Congress President Rahul Gandhi could give a fitting reply like PM Modi.

"The biggest work that the Modi government did was to secure the nation," he said.

Mr Shah also sought to know whether the "tukada-tukada gang" and "Rahul baba and company" could give a "capable leadership" to the country.

"After the air strike carried out by the IAF, there were celebrations everywhere in India, while only at two places there was grief -- one in Pakistan and another in Rahul baba and company's camp," he alleged.

Attacking Telangana Chief Minister and TRS President, K Chandrasekhar Rao, and AIMIM chief Asaduddin Owaisi for their alliance, Mr Shah asked, "Can KCR (as the Chief Minister is referred to by many) become PM of this country in any circumstance?"

Noting that the BJP respects the mandate of the people in the recent Assembly elections in Telangana in which the TRS returned to power, Mr Shah pointed out that the coming Lok Sabha elections were to "choose the Prime Minister of the country, to choose Modi and BJP."

He said the Modi government gave Telangana central funds of over Rs 2.45 lakh crore in the last five years, while the previous UPA regime gave only Rs 16,500 crore.

The BJP leader also accused the Telangana Rashtra Samithi (TRS) of being a "dynastic party" just like the Congress.