He, however, wants the national parties to be prepared to play a supporting role if regional parties including Telugu Desam Party (TDP) win good number of seats in the Lok Sabha polls. 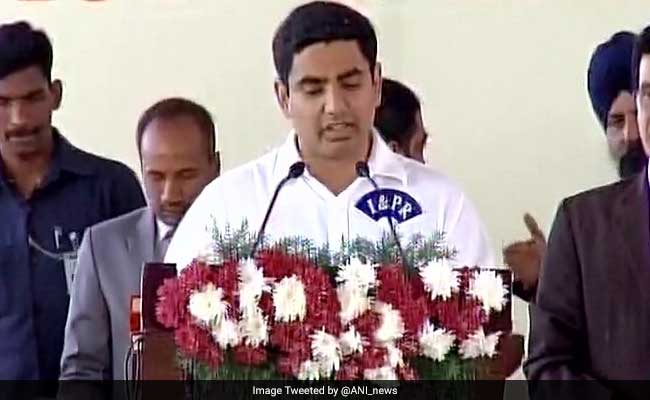 Nara Lokesh is contesting from the Mangalagiri assembly segment. (File)

Andhra Pradesh Chief Minister N Chandrababu Naidu's son Nara Lokesh, who is contesting assembly elections for the first time, feels it is "impossible" to imagine an alternative force without the support of either the Congress or the BJP.

He, however, wants the national parties to be prepared to play a supporting role if regional parties including Telugu Desam Party (TDP) win good number of seats in the Lok Sabha polls.

"All coalitions have either the BJP or the Congress. But there is a role for regional parties at national level. So, I believe an alternative front minus the Congress or the BJP does not exist. It is impossible to imagine," Mr Lokesh told PTI in an interview.

He is contesting from the Mangalagiri assembly segment, a seat which the TDP has not won since 1985. His main rival is sitting YSRCP MLA, Alla Ramakrishna Reddy, who had defeated the Telugu Desam candidate by 12 votes in 2014.

Asserting that India needs a prime minister who listens to states, the 36-year-old TDP leader says "voices of states" should not be "choked" and the federal spirit need to be maintained as he accused Prime Minister Narendra Modi of "match fixing" with Telangana Rashtra Samithi (TRS) and YSR Congress Party (YSRCP) to defeat the TDP at any cost.

Mr Lokesh, the incumbent IT minister and a member of the legislative council, says he does not "subscribe" to an idea of a "non-BJP and non-Congress" front being toyed by Telangana Chief Minister K Chandrashekar Rao, also known as KCR.

"No one trusts KCR. Everyone knows his narrative and are smart enough to understand. It (non-BJP, non-Congress) does not work. I do not subscribe to KCR's idea," he says.

Asked if the national parties should play a supporting role, Mr Lokesh says, "It will depend on numbers. If regional parties have strong number, definitely the Congress might end up supporting."

He argues that the next government should have a strong state representation because the nation is strong only if states are strong.

"The challenge today is the voice of the states is choked. BJP-rules states don't talk in the GST council meeting, they simply nod in the meeting. The federal spirit is required but that does not exist," he says.

He predicts a big TDP win in the elections - 125 out of 175 assembly seats and 18-20 of the 25 Lok Sabha seats - in the simultaneous elections to be held for the first time in the newly carved out Andhra Pradesh.

He claims successful implementation of welfare schemes like ''Pasapu Kumkum'', infrastructure development and employment will work in its favour.

"Opposition claims there is anti-incumbency but it does not have a clear agenda," he says, adding that the YSRCP only criticises the TDP in rallies.

"People are noticing it. At the end of the day, our opponent has zero experience. Naidu has 40 years of experience, people really want him to come back," he adds.

Asked if his father would leave the state for a role in New Delhi, Mr Lokesh says, "Andhra is in crossroads. He is required here and will continue to be the chief minister. We need an experienced leader and visionary like him at least for next five years."

"Naidu is required in Andhra Pradesh but the country needs a prime minister who actually listens and willing to hear problems of each state," he said and shared how his father even at the age of 68 years takes feedback from people seriously and works up on it.

"There is no magic wand to solve all problems. However, we have to navigate and figure out solutions. Modi made big promises but he delivered nothing," he says and accuses the prime minister of "neglecting" Andhra Pradesh and "deceiving" people of the state after bifurcation.

He says the state requires the Centre's support but "the prime minister has no idea what is going on in India. He is always on the plane. He never gets into the dust of India".