Mausam Noor's uncle and Isha Khan's father, Abu Hashem Choudhary, is a three-time Lok Sabha lawmaker from Malda-South and contesting from there again. 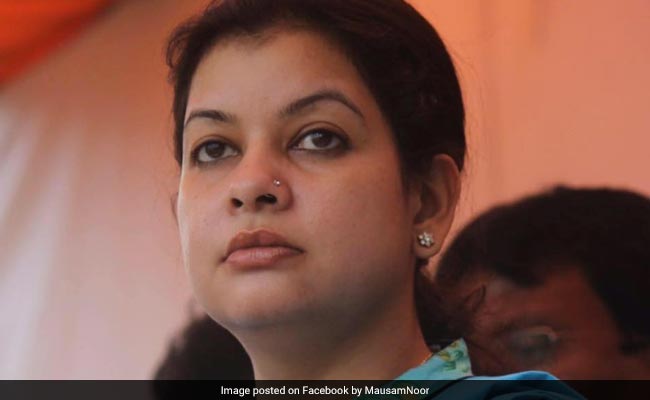 It was a "difficult decision" to join TMC, said Mausam Noor, sitting behind her desk in her ancestral home, a legacy of Ghani Khan Choudhary, her uncle and veteran Congress leader from Malda, who represented it eight-times in Parliament.

But Ms Noor says she has no regrets. She is among three members from Ghani Khan's family contesting the General Elections this time on different party tickets. Isha Khan, her cousin and sitting assembly lawmaker from Sujapur legislative segment in Malda-North constituency, is contesting this Lok Sabha election against her on a Congress ticket.

Ms Noor's uncle and Isha Khan's father, Abu Hashem Choudhary, is a three-time Lok Sabha lawmaker from Malda-South and contesting from there again.

The father-son duo is trying to appropriate the legacy of Ghani Khan, who has considerable influence on the psyche of voters in the area even a decade after his death.

After Ms Noor decided to fight against her cousin, a wall has been erected at the ancestral home, sending a clear message to visitors to weigh their options before entering the compound.

A series of chairs are lined up near the wall and large photos of Ghani Khan and his sister Ruby Noor, Mausam Noor's mother, hang over them.

Visitors are forewarned against sitting on one of the chairs, a weathered leather high-back chair. "Ghani Khan used to sit there," a family loyalist said.

It is this loyalty, Congress hopes, would win it the two seats in Malda to the father-son duo. Ms Noor had won Malda-North constituency in 2014 on a Congress ticket. She joined the Trinamool Congress in January this year.

Malda, about 350 km from West Bengal capital Kolkata, has been a Congress bastion for decades. After Ms Noor joined TMC, the wall was built, dividing the compound where Ghani Khan used to meet his supporters and assured them his support.

Family feuds are not new in politics. But this wall may mark the end of an era for Congress, which has not shied from seeking votes in Ghani Khan's name in the two constituencies - Malda (North, South) - for four decades.

Congress workers fear Ms Noor may divide Muslim voters, who have traditionally stood behind the family and have been a deciding factor in previous elections.

"It was a difficult choice. A difficult decision," Ms Noor told PTI. "I made this decision after consulting my supporters, advisors and even my family. It was a situation when I thought the only way to confront BJP was to form an alliance of the opposition. But that did not happen. The only next option available was joining TMC as only didi (Chief Minister Mamata Banerjee) is able to stop the religious polarisation happening here," she said, explaining why she does not "regret" her decision.

What about the family? Did not her decision divide the family of Ghani Khan? Ms Noor maintains her decision to join TMC has not harmed her personal relations with her cousin or her uncle.
She may be right. Isha Khan's wife was looking after Ms Noor's children as they rode bikes inside the campus when reporters visited the ancestral home. But voters do not seem convinced, they see her decision to quit Congress as selfish.

"This wall upsets me," said Jamarul, who came to meet Isha Khan. "For years, this building stood for something - security, safety and continuity. That is lost now. How could she do this? It could split Muslim votes benefiting the BJP," he said, appearing disappointed with the split in the family.

Despite the political divide, supporters said, the family members have managed to live in the same compound. They also share their kitchen. "There is one kitchen, food is served from there. However, during elections, Noor and her children's food is being cooked separately," said Renu Roy, who has worked for the family for 40 years.

Ms Noor's decision is "just politics", she added. Abu Hasem Khan refused to speak on Ms Noor's defection to TMC, saying only that it will not "affect us".

"TMC has tried to campaign that Noor's desertion will harm us. However, her decision will harm her own reputation and not of our family," Isha Khan said, confident that Congress will retain both the seats.

While Ms Noor is a candidate from Malda-North, her vote is in Malda-South, where her uncle is pitted against TMC's Md Moazzem Hossain.

Will she vote for her uncle on April 23, when the constituencies go to polling? That's not clear yet. Also, it is difficult to objectively analyse the consequence of Ms Noor's decision to join TMC until its outcomes are clearly visible.

That will take a month when the general election results are declared on May 23.