The television channel, which was set up to promote PM Modi's rallies during the Lok Sabha elections, had been in the eye of a controversy ever since it first made an appearance on March 31. 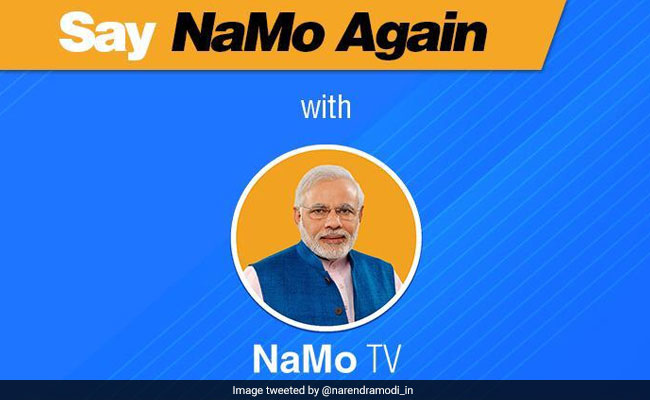 The Union Ministry had initially claimed that NaMo TV was only an "advertisement platform".

"As NaMo TV was a campaign tool for the BJP, it was no longer needed after the Lok Sabha elections got over. So it was taken off air as soon as campaigning ended on May 17," a BJP leader told PTI.

The television channel had been in the eye of a controversy ever since it first made an appearance on March 31. It was even mentioned in a tweet against the Election Commission by Congress president Rahul Gandhi yesterday.

From Electoral Bonds & EVMs to manipulating the election schedule, NaMo TV, "Modi's Army" & now the drama in Kedarnath; the Election Commission's capitulation before Mr Modi & his gang is obvious to all Indians.

The EC used to be feared & respected. Not anymore.

Opposition parties objected to NaMo TV on the grounds that having a television channel dedicated to PM Modi was a direct violation of the Election Commission's Model Code of Conduct. They also objected to the Prime Minister tweeting out an image advertising it as a medium to access his "exciting" election campaign and "a lot more fascinating content".

Many television service providers -- including Tata Sky, Videocon and Dish TV -- aired the channel as a free service to subscribers across the country.

Although the Union Information and Broadcasting Ministry insisted that NaMo TV does not require any approval because it is only an "advertisement platform", the Election Commission ruled on April 12 that the channel cannot screen any political content without the prior approval of its Media Certification and Monitoring Committee. Earlier this month, the Delhi Chief Electoral Officer had sent a notice to the BJP for airing election-related content on NaMo TV during the "silence period" preceding the city's voting day on May 12.

The Election Commission had also stalled the release of 'PM Narendra Modi' -- a biopic on the Prime Minister with actor Vivek Oberoi as its lead -- on the grounds that it could influence voters ahead of the Lok Sabha elections. It will now hit the screens on May 24, a day after the results are declared.

Lawyers Demand Increased Security After Colleague Murder In UP