In Kolkata, Mamata Banerjee's Election Campaign Has A Chinese Connection

India's biggest Chinatown, the one located in Kolkata has traditionally kept politics at arm's length. 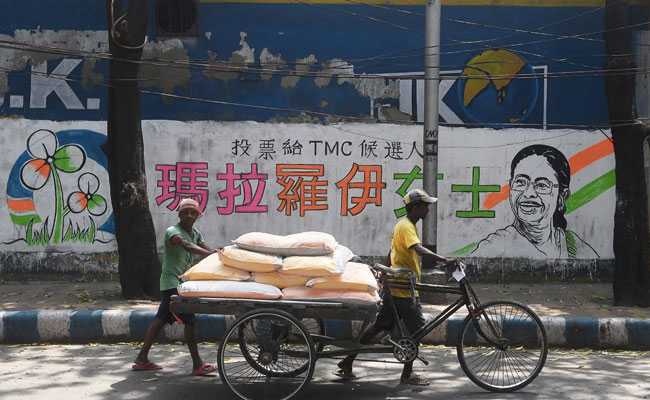 It may look double Dutch, but election campaign messages in Chinese characters are being used for the first time in Kolkata. Slogans for West Bengal Chief Minister Mamata Banerjee and against Prime Minister Narendra Modi, whose party BJP is trying to muscle in on West Bengal seats, have started appearing across the city's Chinatown.

The election starts on April 11 and PM Modi sees the eastern state as a key battleground in his bid for a second term.

In response, Ms Banerjee's Trinamool Congress has led the offensive for Chinese votes with graffiti and slogans on local walls.

Local Chinese youths have been helping the party spread its message, according to Swapan Samaddar, a city councillor whose district includes Chinatown. "Many Chinese youths are supporters and they are lending a hand," he said. Local Chinese youths have been helping the Trinamool spread its message. (AFP)

One graffiti image shows PM Modi being blown away in a Ms Banerjee storm, while another plays on the prime minister's description of himself as the national "watchman" or chowkidar, saying in characters: "Watchman is a thief".

"It's good to send the message of the ruling Trinamool Congress to the Chinese community in China Town. We are happy to see it," said Chen Khoi Kui, secretary of the Chinese Youth Club, a welfare organisation. "It's a novel venture that draws the attention of voters."

Despite the deep historical roots, the Chinese population has dwindled in recent decades to about 1,000 people. The district is still renowned for its Chinese restaurants which are popular.

"Many Chinese who have been living this city for a long time still prefer to speak in their own language amongst themselves," said Chen.