HD Kumaraswamy Lashes Out At Congress For "Chakravyuha" Against Son

H D Kumaraswamy lashed out at Congress and others for ''colluding'' with independent candidate and multi-lingual film actress Sumalatha, wife of late Congress leader and actor Ambareesh, in Mandya 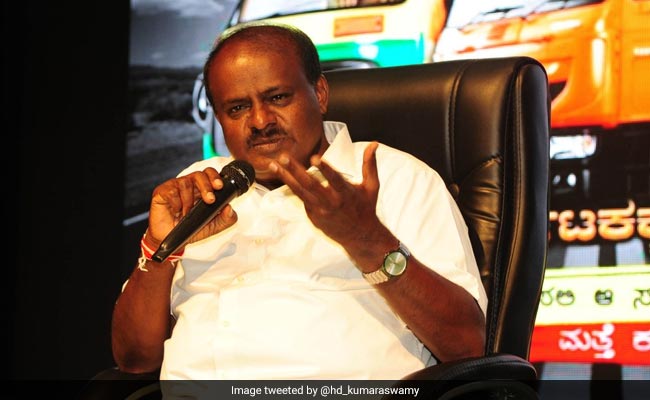 Bringing to fore again deep fissures in the ruling front, the JDS leader lashed out at Congress and others for ''colluding'' with independent candidate and multi-lingual film actress Sumalatha, wife of late Congress leader and actor Ambareesh, in Mandya, instead of working for Nikhil.

"There are developments that have gone out of hand in Mandya. The independent candidate has got widespread support. She may appear as an independent but she has got the support of Congress, BJP and Raita Sangha (farmers' association). All of them have joined hands to trample JD(S)," he told reporters in Chikkamagalur.

He was replying to the queries on JD(S) supremo and his father H D Deve Gowda's remarks on Thursday that things have gone out of hand in Mandya, which goes to polls on April 18, and even former chief minister and Congress strongman Siddaramaiah cannot reverse it.

Mr Kumaraswamy said "He (Gowda) has only uttered the facts... Somewhere someChakravyuha has been hatched but the people of Mandya, those toiling populace, have already taken a decision (to elect Nikhil)," the chief minister said. He added he was making the statement clearly without hiding anything.

''Chakravyuha'' is a deadly battle formation narrated in the epic Mahabharata in which Arjuna's son Abhimanyu was trapped and killed by the Kauravas.

Reacting to Kumaraswamy's outbursts, Sumalatha told reporters that Congress "workers are indeed with me".

Seeking to turn the tables on the chief minister for his ''Chakravyuha'' attack, she said what he would call "activities of the entire government machinery, ministers and lawmakers allegedly aimed at defeating her.

"Which Vyuhais that?. They (JD-S) are playing dirty tricks.They have fielded three other candidates with the name Sumalatha against me. Thosethree candidates are wearing glasses, necklace and attire likeme in the photograph submitted in their affidavit," she claimed.

The JD(S) leadership always considered Mandya as its citadel given the huge population of dominant Vokkaliga community, which Deve Gowda belongs to, in the constituency, represented by Ambareesh for three terms.

However, upsetting the equations, Sumalatha decided to contest the election from Mandya as an independent after failing to get ticket from the Congress.

The BJP is backing Sumalatha instead of fielding its candidate. There is widespread resentment within the local Congress over JDS being alloted the seat under an electoral arrangement between the coalition partners.

Disgruntled JD(S) leaders are also reportedly working against the third generation of themighty Deve Gowda clan. Deve Gowda''s another grandson Prajwal Revanna, son of minister H D Revanna, is contesting from Hassan, where also a similar situation prevails with the Congress at the grassroot level openly expressing opposition to the JDS.