On Wednesday, agitated employees of the Yermarus Thermal Power Station had shouted "shame shame" and blocked the Chief Minister's convoy. 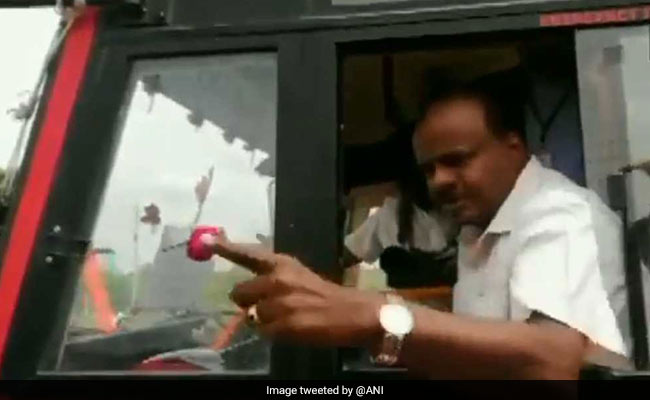 Union Parliamentary Affairs Minister Prahlad Joshi today slammed Karnataka Chief Minister HD Kumaraswamy and said he had "lost his mental balance" after the latter lashed out at workers of Yermarus Thermal Power staging a protest over wages in Raichur.

"The people of Karnataka didn't vote for Mr Kumaraswamy to become the chief minister (CM). Then why is he the CM? He is holding the position with an unhealthy alliance with Congress. Now, he has lost his mental balance particularly after his son's defeat in the recent polls," Karnataka lawmaker said.

On Wednesday, agitated employees of the Yermarus Thermal Power Station had shouted "shame shame" and blocked the Chief Minister's convoy for a short while, urging him to fulfill their long pending demands.

Mr Kumaraswamy, who was on his way to Karegudda for his "village stay programme" got angry after witnessing the protest and was later seen scolding them for blocking his way.

Mr Joshi had put out a tweet after the incident which read, "This is how our CM @hd_kumaraswamy reacted when asked for basic amenities. Is he CM for the entire state or only for JD(S) voters?"

This comes in the wake of political differences between coalition partners Janata Dal (Secular) and Congress are coming out in the open in the state. However, two parties have repeatedly said there is no threat to the coalition and the government would last for the full term of five years.

Mr Joshi further said, "There are many leaders from the Bharatiya Janata Party (BJP) who had to face defeats in various polls in the past, however, we have examined the reasons and moved past it.
Prime Minister Narendra Modi has explained everything regarding EVMs in the Rajya Sabha for the people."

"Instead of blaming EVMs for their debacle, the opposition should focus on the reasons why they had to face such a defeat. Blaming EVMs will not help them anyway," he added.

Various opposition parties have alleged that EVMs were manipulated during the recently held Lok Sabha elections and demanded that the country should return to ballot papers.

The BJP won swept the Lok Sabha polls in Karnataka, winning 25 out of the 28 seats in the state.