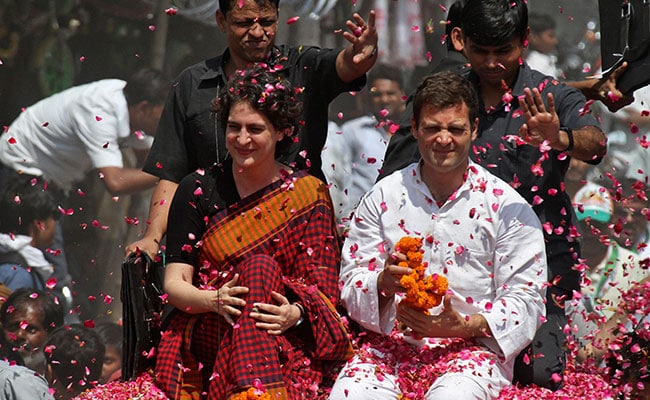 For people at the Congress office in Lucknow's Mall Avenue, the appointment of Priyanka Gandhi Vadra as in-charge of the eastern Uttar Pradesh campaign brings hope as well as a feeling of uncertainty.

On Saturday, as hundreds gathered at the party office to celebrate the Republic Day, the mood here was upbeat, but there were words for caution as party leaders said while they see "Indira Gandhi in Priyanka", a lot needed to be done.

Anil Kumar Sharma, assistant permanent secretary (organisation) who pedals more than 14 km to reach the office daily, is all smiles as he says a defining moment "in the battle of truth versus lies has arrived."

"Modi and the BJP fooled the people with their lofty talks and have delivered nothing. Their slogan of Congress-mukt Bharat will never succeed and Priyanka ji will knock the daylights out of the ruling party," he said.

Ram Avtaar, 47, who runs the party canteen, gave a thumbs-up for Priyanka Gandhi's entry into active politics. He says till recently he used to sell 100 cups of tea daily, and now the number has gone up to 250 since the announcement was made and more people started arriving at the party office.

Om Prakash Rai, a security guard, who is from Ballia in eastern Uttar Pradesh, said he is sure that "acche din" (good days) for the party was just round the corner".

But others like Gyas Ahmad, Santosh Gaur, Pramod Shukla, Shiv Shankar and Vishnu Avatar are circumspect at the assessment. They said they were drivers and were let go of their jobs a few months ago due to cash crunch at the local office. "We will meet her, maybe she will help," they said.

In a dimly-lit room inside the office, packed with old newspaper clippings, Arman Ahmad, 33, is also circumspect at the celebrations following Priyanka Gandhi's entry into active politics.

"I am wedded to the Congress due to its secular ideology, but tell me how can change come if the organisational structure continues to be so rusted as it is now?" he said. A homeopath by profession and an admirer of former prime minister Atal Bihari Vajpayee, he rues how he could manage to convince a paltry 50 people in his ward, New Haiderganj, in three years to join the Congress. "We need more visibility," he said.

The party office here is also getting decked up for Priyanka Gandhi's visit as the Congress works out the date.

The general elections are due by May.