Lok Sabha Elections 2019: Pragya Thakur had gone to meet with Uma Bharti as she landed in Bhopal this morning amid talk of a rift. 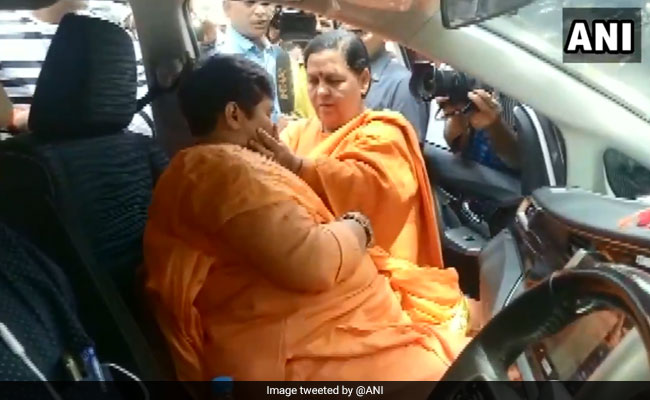 Union Minister Uma Bharti, who is not contesting the election but has won from Bhopal in the past, was seen consoling Pragya Thakur, who stayed seated in an SUV, wiping her tears.

Pragya Thakur had gone to meet with Uma Bharti as she landed in Bhopal this morning amid talk of a rift. While leaving in an SUV, Pragya Thakur broke down.

Uma Bharti was seen consoling her and offering her water. She was also seen bowing to Pragya Thakur.

As reporters asked Uma Bharti what she had discussed with Pragya Thakur, she said: "I have been a former MP in Bhopal and she is contesting now. This is not roothna-manana. I am very happy that she is a candidate here. It is like this is one of the best days of my life. It seems like the victory of the BJP is confirmed in Bhopal now."

Speculation flew after Uma Bharti, asked by reporters on Saturday whether she was being replaced by Pragya Thakur - another "Sadhvi" in Madhya Pradesh - said: "Pragya is a mahaan (great) saint. I am murkh (foolish) and a tuchch praani (ordinary being)."

Uma Bharti was credited with reviving the BJP in Madhya Pradesh and ending the Congress's domination when her party won the 2003 state election.

Pragya Thakur is one of the main accused in the 2008 Malegaon blasts in which six people were killed and over 100 injured. Uma Bharti was among the politicians who had come out in her support after her arrest.

Known for back-to-back controversial statements since she joined the national election contest, Pragya Thakur has often spoken about being tortured in jail and even developing cancer.

"I believe that she is a great saint and patriot because the pain she suffered, no ordinary women will ever be able to handle," said Uma Bharti.