Udit Raj claimed that he tried to talk to BJP chief Amit Shah and Prime Minister Narendra Modi but could not do so despite multiple efforts. 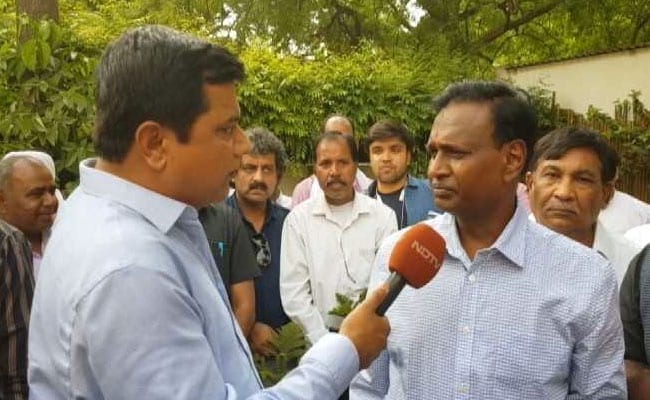 Udit Raj said Delhi BJP chief had been assuring him that he'll be given the ticket from North-West Delhi.

Sitting member of parliament from the reserved North-West Delhi seat Udit Raj on Monday asked the BJP to clear the confusion over his candidature for the Lok Sabha polls, concerned that the party may deny him a ticket.

Mr Raj told reporters that he talked to several senior leaders about his Lok Sabha ticket but was asked to wait.

He also claimed that he tried to talk to BJP chief Amit Shah and Prime Minister Narendra Modi but could not do so despite multiple efforts.

"I am the best performer of the party among its Delhi MPs. Also, I am the only Dalit leader of the BJP who is known across the country. I don't know why I am being treated like this," he said.

Around midnight, Mr Raj, accompanied by dozens of his supporters, reached the Delhi BJP office on Pandit Pant Marg after the reports that the party might field singer Hans Raj Hans as the Lok Sabha candidate from North-West Delhi, sources said.

Supporters of both Mr Raj and Mr Hans created ruckus at the party office, they said.

Mr Hans and some senior BJP leaders were present in the office, the sources said.

Earlier, supporters of Mr Raj gathered at his Atul Grove Road residence and resorted to sloganeering demanding "justice" for their leader.

"I am a disciplined BJP member, I am just asking for what is due to me," he said demanding the party ticket from North-West Delhi.

Mr Raj said he will wait till an announcement of the official BJP candidate on the North-West Delhi (reserved) seat is made before deciding his future course of action.

Earlier in the day, Mr Raj, in a series of tweets, hoped that the BJP will not betray Dalits in the country.

The BJP has announced its candidates on six parliamentary seats in Delhi. On Monday, the party announced that it will be fielding former cricketer Gautam Gambhir and Meenakshi Lekhi from East Delhi and New Delhi, respectively.

"I merged my party in the BJP, crores of my supporters are worried over my ticket. My name has not been declared from the North West Delhi seat yet. My supporters have decided to wait till 4 PM today," Mr Raj tweeted.

Mr Raj had merged his Indian Justice Party (IJP) with the BJP and contested the Lok Sabha election from North-West Delhi in 2014.

Mr Raj said Delhi BJP chief Manoj Tiwari had been assuring him that he will be given the ticket from North-West Delhi. He also claimed to have contacted senior party leaders Nirmala Sitharaman and Arun Jaitley in this regard.

The BJP MP has been a vocal supporters of Dalit rights and had often taken views contrary to the party line on occasions like the Sabrimala issue and ''Bharat Bandh'' called by Dalit organisations last year.