Earlier, in Tuticorin, Amit Shah alleged that the candidates nominated by the Congress and DMK - the likes of Karti Chidambaram, Kanimozhi and A Raja (from Nilgiris) - were tainted by graft. 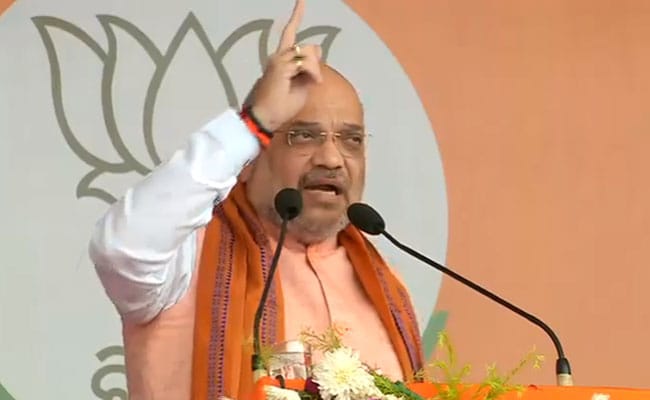 BJP president Amit Shah Tuesday trained his guns on the DMK-Congress alliance in Tamil Nadu, alleging that Karti Chidambaram, A Raja and Kanimozhi, fielded by the combine for the Lok Sabha elections, were tainted with corruption.

In his poll rallies at Tamil Nadu's Tuticorin and at Sivaganga and Coimbatore, he focused on "corrupt" leaders fielded by the DMK and Congress, his party led government ensuring the security of the nation and avenging the Pulwama attack and the Centre's support to Tamil Nadu on the growth front.

Addressing a poll rally, Mr Shah hit out at National Conference leader Omar Abdullah for his "Prime Minister for Jammu and Kashmir" line and asked the people whether they supported the Kashmir leader's remarks.

"Jammu and Kashmir is an integral part of India, we will never compromise on the Kashmir issue," he said.

In Coimbatore, he slammed the United Progressive Alliance saying it "cannot" protect the country and only the Narendra Modi government could do it.

The BJP chief demanded that Congress president Rahul Gandhi make it clear to the people if he concurred with Omar Abdullah.

Hitting out at Mr Gandhi, he said while the Congress leader called the GST "Gabbar Singh Tax" in this budget, businessmen with Rs 40 lakh turnover have been exempted.

Earlier, in Tuticorin, Mr Shah alleged that the candidates nominated by the Congress and DMK - the likes of Karti Chidambaram, Kanimozhi and A Raja (from Nilgiris) - were tainted by graft.

Seeking votes for his party candidate and state unit chief Tamilisai Soundararajan in the port city of Tuticorin, Mr Shah said "when BJP-led government returns to power" at the centre it would continue contributing even more for the growth of Tamil Nadu.

He said the BJP government avenged the Pulwama attacks through air attacks on Pakistan.

Mr Palaniswami lashed out at DMK for being "supportive" for running the copper plant and its expansion by setting apart 243 acres during its previous tenure.

Pointing out that the DMK was seeking votes citing last year's incidents, he accused the arch rival of spreading disinformation to win votes.

Addressing a rally at Sivaganga, where his party nominee H Raja is pitted against Congress leader P Chidambaram's son Karti Chidambaram, he appealed to the people to strengthen the hands of Prime Minister Narendra Modi by electing Mr Raja.

In Tamil Nadu, while on the one side people have the NDA, which brought laurels to the country, on the other they see Congress and its allies, whose leaders Kanimozhi, A Raja and Karti Chidambaram indulged in corruption to the tune of about Rs 12 lakh crore, he alleged.

Taking potshots at the Congress, Mr Shah said Rahul Gandhi may have had Karti Chidambaram in mind when he recently spoke of giving bail to people --in his party manifesto-- and not lodging them in prisons.

In its manifesto, Congress dwelt on amending the Code of Criminal Procedure and promised to release immediately all remand and under trial prisoners facing charges punishable with imprisonment of three years or less.

Mr Shah said the BJP government was implementing several poverty alleviation schemes and added it was AIADMK founder and late Chief Minister MG Ramachandran who pioneered such pro-poor initiatives in India for the benefit of the poor.

Several schemes were being implemented for the benefit of 50 crore poor people and seven crore beneficiaries received LPG cylinders, he said.

Though the BJP had a lone lawmaker (Pon Radhakrishnan) from Tamil Nadu, his party led government at the Centre implemented a host of schemes for its progress, he said.

Mr Shah said the UPA regime had alloted Rs 94,540 crore during its tenure for Tamil Nadu, while the NDA government had provided Rs 5,42,068 crore in just five years for the growth of the state.

Among the projects brought to Tamil Nadu were the Defence corridor, while a separate department for fishermen's welfare was created at the Centre (Tamil Nadu has a huge population of fishermen and it would benefit them), he recalled.

Terming his party's alliance with AIADMK, PMK and DMDK as robust, he said: "I am confident that the alliance under the leadership of Prime Minister Narendra Modi and Chief Minister K Palaniswami will emerge victorious and the NDA alliance will go on to win over 30 Lok Sabha seats from Tamil Nadu."

He expressed confidence that PM Modi would again become the Prime Minister and that the new government too would work for Tamil Nadu's growth alongside the State government.

He also pointed to projects, including an AIIMS Hospital at Madurai and the Sagarmala, which would benefit Tamil Nadu and the efforts taken by the Centre to make Coimbatore, Erode and Tirupur smart cities.

To serve the people, he said BJP's alliance with AIADMK will continue for Assembly polls (2021) as well.