After Blessing Her Son, PM's Mother Casts Her Vote In Ahmedabad 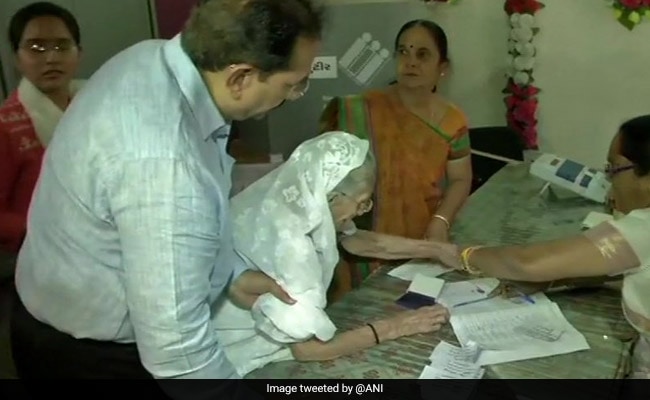 After blessing her son, the 98-year-old mother of Prime Minister Narendra Modi cast her vote at a polling booth in Ahmedabad's Raisan this morning. Earlier, Heeraben gifted her son a shawl, coconut and sweets after he touched her feet to seek her blessings for the national election.

Before he went to a polling booth in Ahmedabad on an open SUV, PM Modi spent 20 minutes with his mother, who lives with his brother Pankaj Modi at their family home near the state capital.

In a photo, PM Modi was seen with his hands folded and bending to touch his mother's feet, who was seated on sofa. Then he sits by his mother's side and both exchange offerings of sweets.

After meeting his mother, the Prime Minister briefly spoke with the residents of the colony and agreed to take selfies with some children before he headed out to a school in Ranip to cast his vote.

#WATCH PM Narendra Modi meets his mother Heeraben Modi at her residence in Gandhinagar and takes her blessings. #Gujaratpic.twitter.com/uRGsGX0fcw

"The weapon of terrorism is IED, the strength of democracy is a voter ID. I can say with certainty that the voter ID is much, much more powerful than an IED, so we should understand the strength of our voter IDs," PM Modi said after casting his vote.

Along with BJP chief Amit Shah, the Prime Minister walked on the streets of Ahmedabad after coming out from the polling booth.

PM Modi is seeking a second term in office in the massive election taking place in seven rounds across the country. Today is the third and biggest round, with at least a fifth of the Lok Sabha seats voting.

This morning, PM Modi had tweeted: "Urging all those voting in today's Third Phase of the 2019 Lok Sabha elections to do so in record numbers. Your vote is precious and will shape the direction our nation takes in the years to come..."