30% Turnout Till 11 Am In Tripura, Biplab Kumar Deb Casts Vote

"Till 11 am voting percentage was 30 per cent," Returning Officer of West Tripura seat Sandeep Mahatme said. 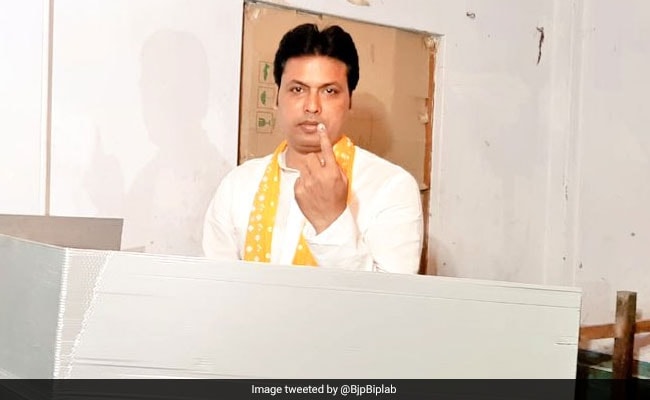 The other Lok Sabha seat-Tripura East-will witness polling on April 18 in the second phase.

Thirty per cent voter turn out was recorded in the first four hours of polling in West Tripura Lok Sabha seat even as the opposition CPI(M) and the Congress alleged of rigging and intimidation of voters.

"Till 11 am voting percentage was 30 per cent," Returning Officer of West Tripura seat Sandeep Mahatme said.

The other Lok Sabha seat-Tripura East-will witness polling on April 18 in the second phase.

Congress candidate Subal Bhowmick accused the supporters of the ruling BJP of indulging in rigging, intimidating voters and resisting electors from entering the booths.

"In Mohanpur, Bishalgarh, Boxanagar, Dhanpur and many other constituencies, booths were captured by workers of the ruling BJP. I have lodged complaints with the ECI," he told reporters.

CPI-M candidate Shankar Prasad Datta said, after receiving complaints of rigging from party workers, the Left party has lodged complaints with the observers and the police.

However, Chief Minister Biplab Kumar Deb said, people were exercising their franchise in a "festive mood" and voting was "completely peaceful".

"People of the state will vote for the BJP with enthusiasm because they want to see Narendra Modi as the Prime Minister of the country and a strong nation," he told reporters at Udaipur.

Asked about incidents of violence or intimidation, DIG Arindam Nath said that "no major incident" has been reported till noon.