Highlights: "We Will Wipe Out Poverty," Says Rahul Gandhi In Big Election Promise

The Lok Sabha elections will be held in seven phases from April 11 and the results will be announced on May 23. 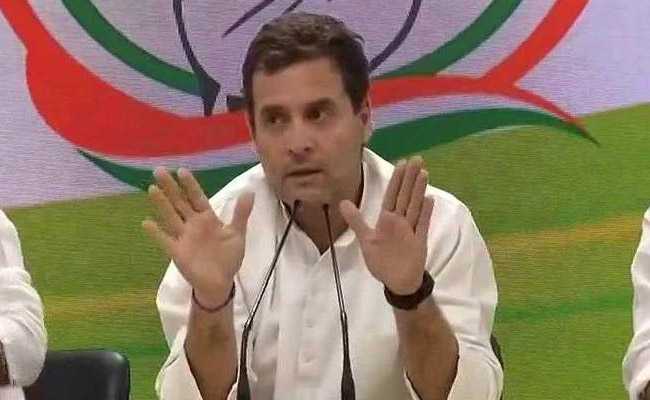 Twenty percent of the poorest families in the country will get Rs 72,000 yearly if the Congress comes to power at the Centre, party President Rahul Gandhi announced today. "It is an extremely powerful, dynamic, well-thought through idea. We have done all our calculations and will be implementing it," he said. Mr Gandhi said 25 crore people or five crore families will benefit from the scheme.

Earlier today, top leaders of the Congress met to discuss and give a final shape to the party's manifesto for the Lok Sabha election starting April 11. The CWC is the highest decision-making body of the party and is chaired by Congress president Rahul Gandhi.

In Uttar Pradesh, actor-turned-politician Hema Malini will hold a rally with Chief Minister Yogi Adityanath in Mathura today. The two leaders are holding rally as part of the BJP's Vijay Sankalp rallies.

Meanwhile, the Supreme Court will take up a plea by Opposition parties to have verification of at least 50% of VVPAT slips be counted and tallied with EVMs. An expert panel of Indian Statistical Institute had submitted its report on the quantum for VVPAT slips counted & tallied with EVMs.

The Lok Sabha elections will be held in seven phases from April 11 and the results will be announced on May 23.

Here are the Highlights from Lok Sabha election campaigning: 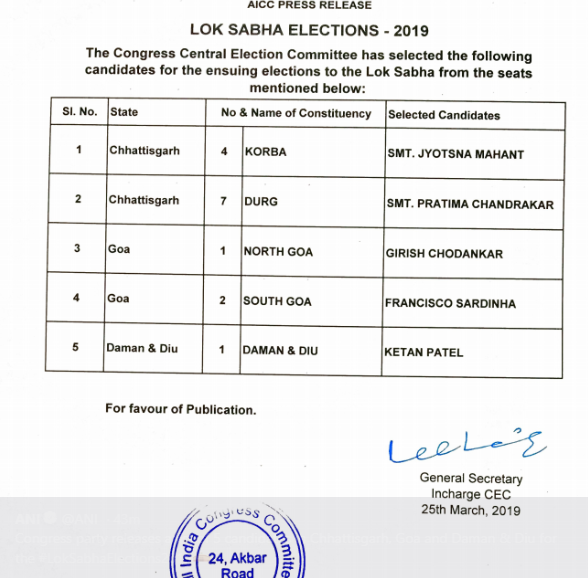 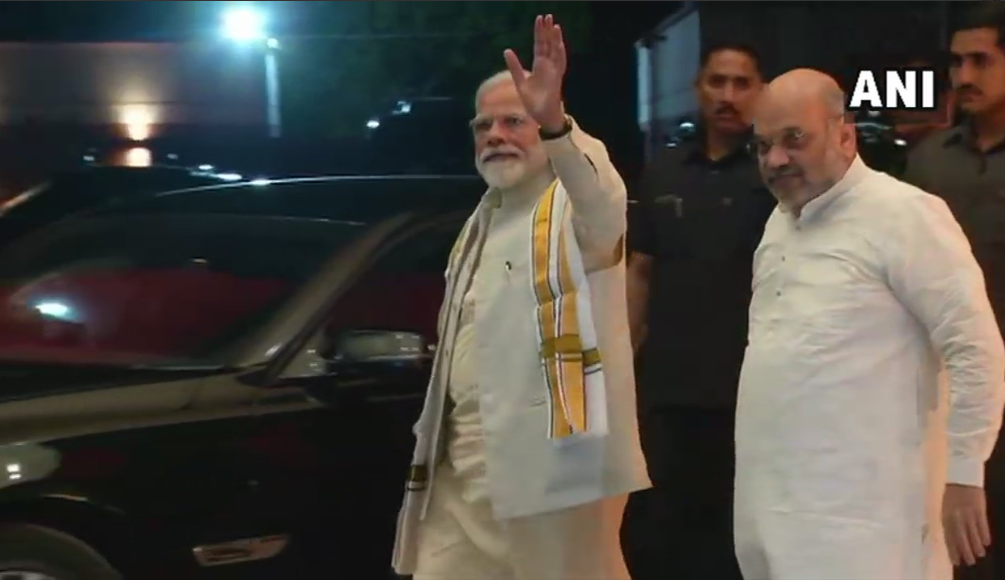 Mar 25, 2019 19:48 (IST)
Congress releases list of 4 candidates for elections to the Legislative Assembly of Odisha. 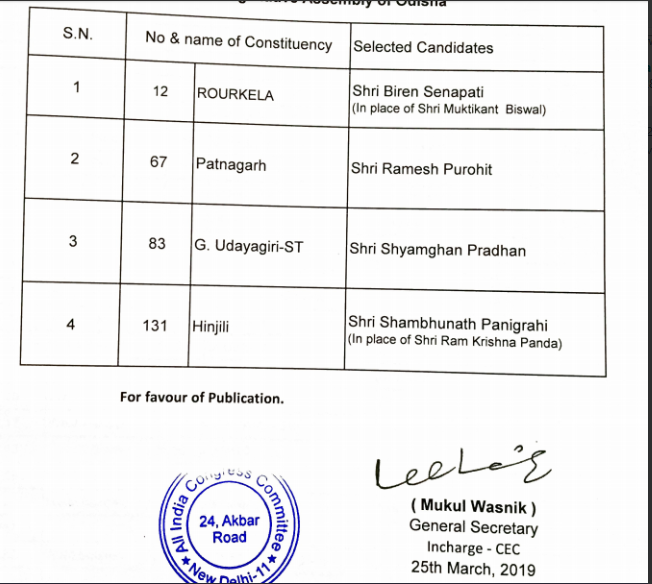 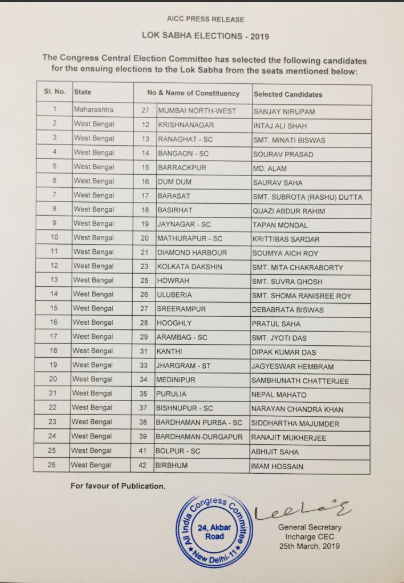 Mar 25, 2019 17:38 (IST)
Janata Dal Secular leader patriarch HD Deve Gowda on filing his nomination papers says:
Mar 25, 2019 17:22 (IST)
Paralympic Games Winner Deepa Malik Joins BJP
She says, "I have seen the ideology of BJP government and their work towards women empowerment. He has put women in leading portfolios, he has also worked extensively for the 'divyangs'." 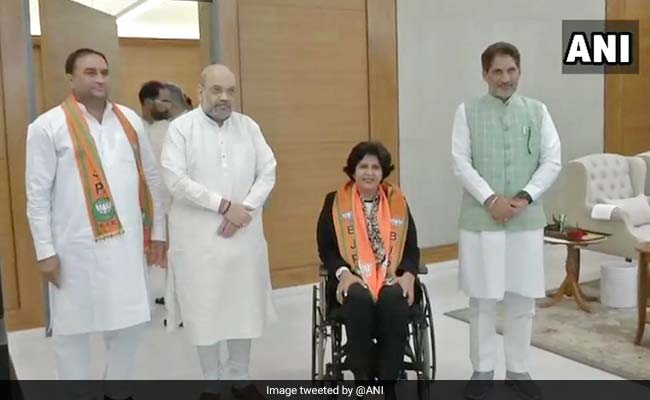 Mar 25, 2019 17:06 (IST)
On HD Deve Gowda filing his nomination papers for the Lok Sabha elections from Tumakuru in southern Karnataka, G Parameshwara says that, "It's a historical day as far as Tumkur is concerned. One of the senior most leaders of the nation, who made Kannadigas proud, who was elected many times from Hassan and was also the Chief Minister is contesting from here."
Mr Parameshwara also says, "Rahul Gandhi suggested us to give Tumkur to JD(S), after joint discussions. We obeyed the decision. We didn't expect that Deve Gowda ji would decide to contest from here, so it's a great news for us. I assure people of Tumkur will make sure he wins." 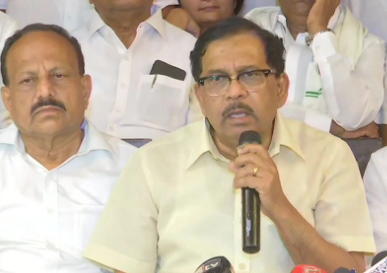 Mar 25, 2019 17:03 (IST)
Kamal Haasan after meeting with Mamata Banerjee says that, "Meeting was excellent we are proud to say that Makkal Needhi Maiam is an ally of TMC in Andaman. We hope this relation evolves in future. I'm going to campaign for their candidate in Andaman." 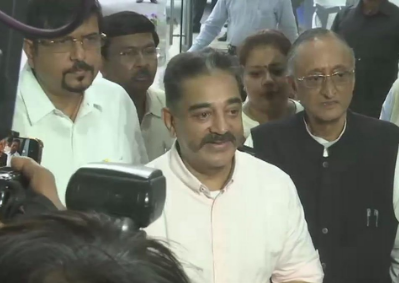 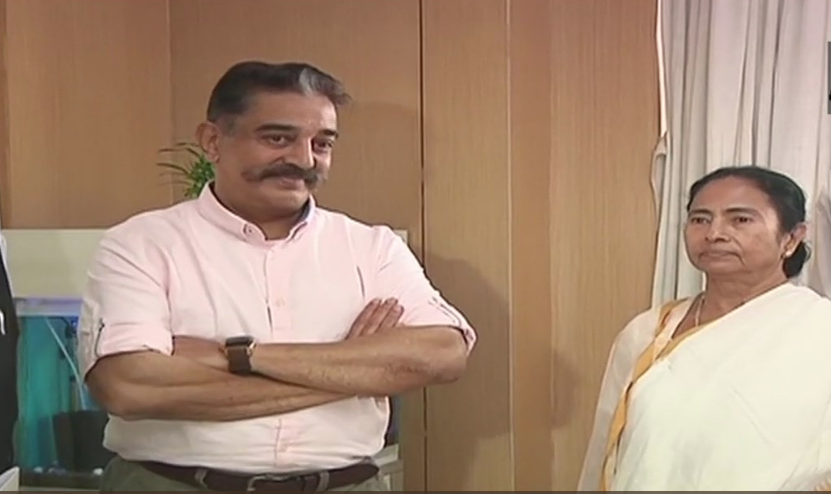 I will proudly give you details of Minimum Income Guarantee scheme, a historic scheme, which has never been implemented before : Congress President @RahulGandhi#RahulForBehtarBharatpic.twitter.com/X0mBQeXYyr

Congress Central Election Committee announces the candidate for the ensuing elections to the Lok Sabha constituency of Amroha. pic.twitter.com/et9dLRDOoE 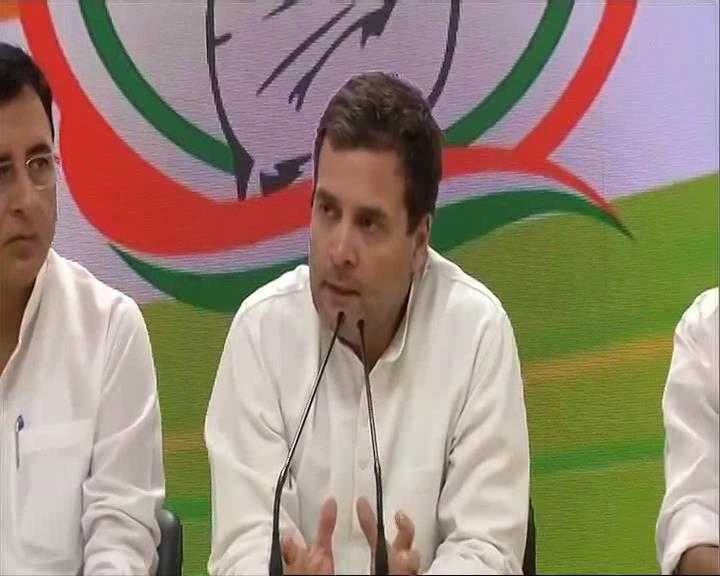 Mar 25, 2019 14:04 (IST)
Rahul Gandhi proposes minimum income support for poor
Congress President Rahul Gandhi is addressing a press conference. The Congress President has proposed 20% of poorest families in India will be given Rs 72,000 annually.
"Scheme will work in a phased-manner. First we will run a pilot project, then a scheme will be launched. All the calculations have been done. Fiscal repercussions have been analysed...this scheme is workable," he said.
Mar 25, 2019 11:51 (IST) 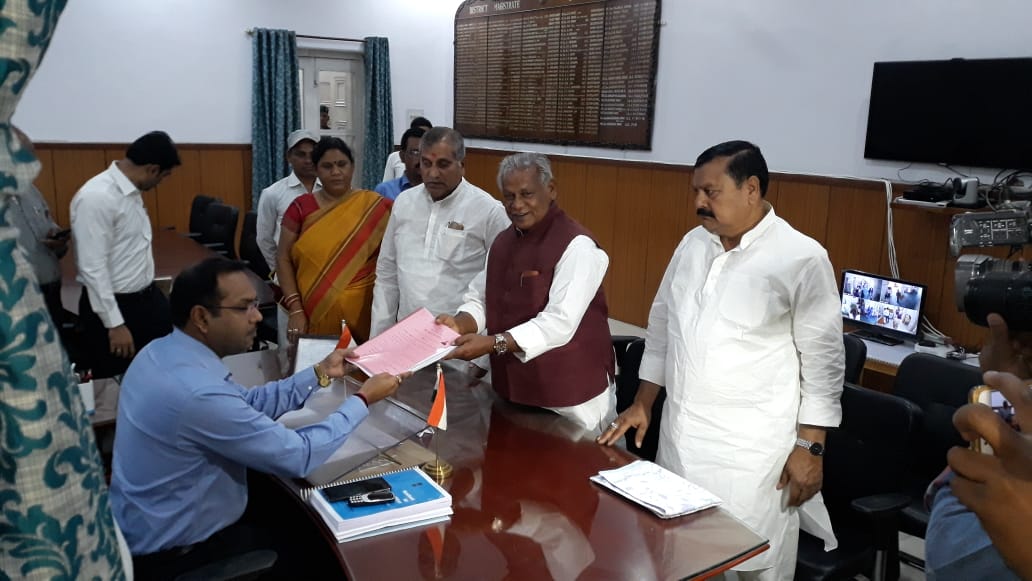 Lok Sabha Election 2019: Society Needs PM Modi: Governor Kalyan Singh Channels BJP Karyakarta
Rajasthan Governor Kalyan Singh has unabashedly praised Prime Minister Narendra Modi and said his re-election is a necessity for the country and the society, in comments that are seen as hugely controversial for someone in a constitutional position."
Mar 25, 2019 11:15 (IST) 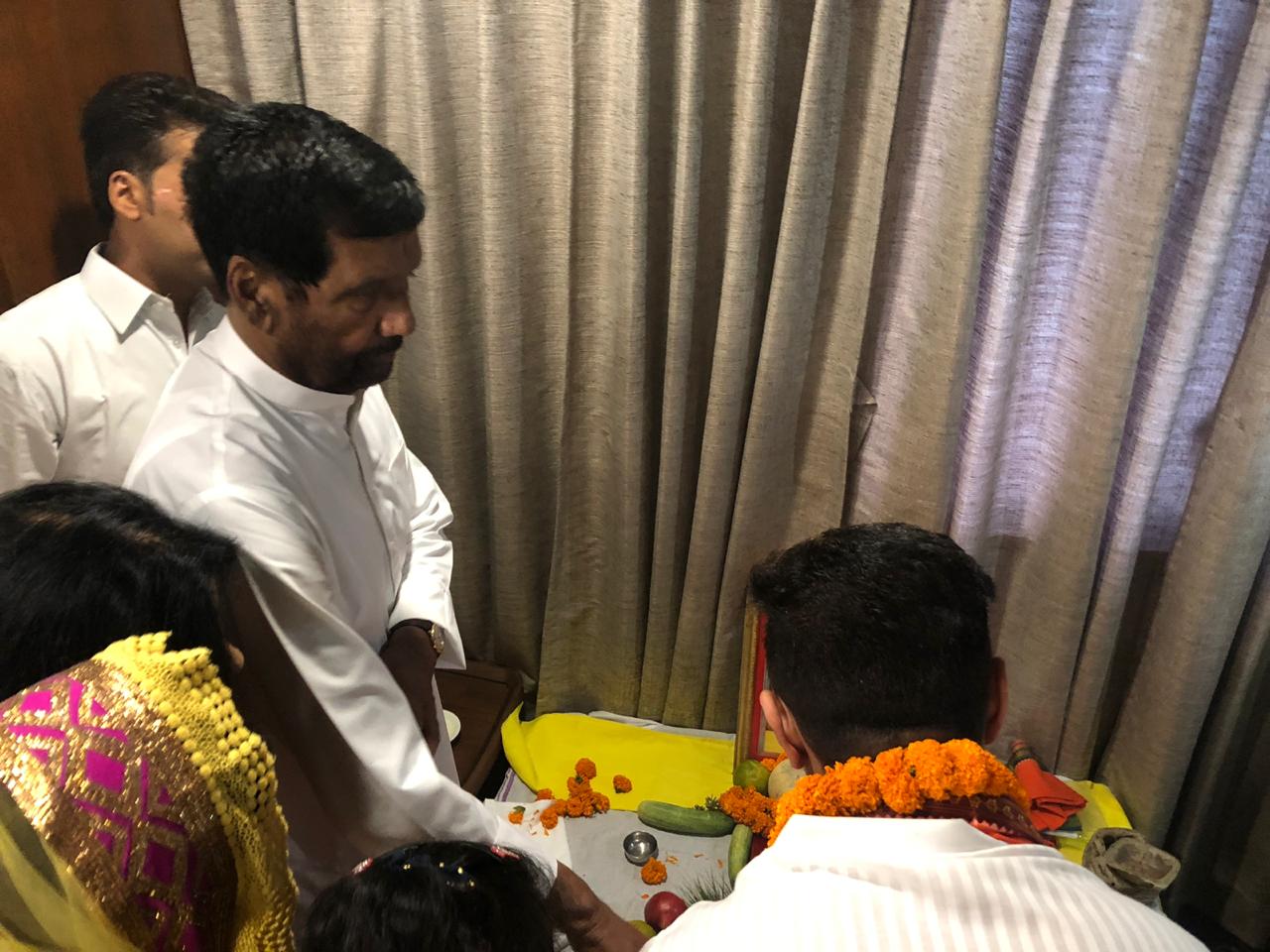 Ram Vilas Paswan and Chirag Paswan performing Puja before the filing of nomination by Chirag in Jamui
Mar 25, 2019 11:00 (IST)

India is one and it will fight as one against all those that try to divide it. #RahulForBehtarBharatpic.twitter.com/QWf0weRftD An Uttar Pradesh BJP legislator's ill-considered, offensive remarks on UPA chairperson Sonia Gandhi and artiste Sapna Chaudhary yesterday has drawn widespread criticism from political parties and social media users alike.
Political attacks ahead of the national election hit a new low when Surendra Singh, a BJP legislator from Uttar Pradesh's Ballia, who has a track record of making derogatory comments, attacked Sonia Gandhi and Sapna Chaudhary after reports that the latter joined the Congress.
The singer and dancer from Haryana denied that she has joined the party and that she will campaign for it.
Here is what Surendra Singh told news agency ANI in Hindi: "Rahul's mother was also in the same profession in Italy and his father made her his own. He (Rahul Gandhi) should also take the family tradition forward and make Sapna his own".
Mar 25, 2019 08:21 (IST)
Delhi Congress leaders will meet party president Rahul Gandhi at 10 am to discuss the possibility of forming an alliance with AAP.
Mar 25, 2019 08:11 (IST)

What's the price for hypocrisy? #PriceHikeYaadRakhnapic.twitter.com/fdPs5rakAA

Lok Sabha Elections 2019: Kamal Haasan Not Contesting Lok Sabha Polls, Releases Makkal Needhi Maiam MNM
Actor-politician Kamal Haasan on Sunday said he would not contest the coming Lok Sabha elections. Releasing the party manifesto and the second list of candidates of his Makkal Needhi Maiam or MNM at a function in Chennai on Monday, Mr Haasan said, "All candidates are my faces. I am proud being the chariot puller than being the chariot".
Mar 25, 2019 08:08 (IST)
Top leaders of the Congress will today meet to discuss and give a final shape to the party's manifesto for the Lok Sabha election starting April 11. The CWC is the highest decision-making body of the party and is chaired by Congress president Rahul Gandhi.
Mar 25, 2019 08:08 (IST)
For all the updates on election-related news on Sunday, click here
Lok Sabha electionRahul Gandhi