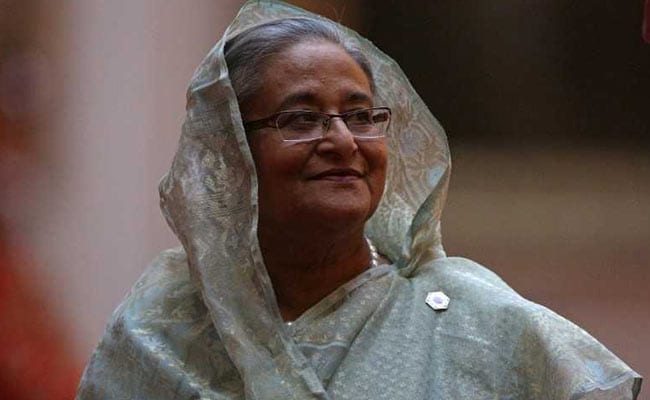 Bangladesh Prime Minister Sheikh Hasina on Thursday telephoned her Indian counterpart Narendra Modi to congratulate him on his victory in the general elections during which the two leaders pledged to raise the India-Bangladesh relationship to unprecedented new heights.

PM Modi led his Bharatiya Janata Party (BJP) towards an emphatic victory for a second term in office.

The Bangladesh Prime Minister telephoned PM Modi to congratulate him on the clear mandate given by the people of India to the NDA Government, an official statement said.

During the telephonic conversation, which lasted over five minutes, Ms Hasina said "this emphatic verdict is a reflection of the trust and confidence reposed on you (Modi) by the people of India."

She said that the people of South Asia would be happy over this win and expected to pave ways for the people of the region to work together.

"The two leaders pledged to continue to raise the India-Bangladesh relationship to unprecedented new heights. They recognised the importance of rapidly completing on-going plans for deepening the partnership in security, trade, transportation, energy and people-to-people contact," the statement said.

It said that doing this within the next three years would have specific significance in view of the centenary of the birth of Bangabandhu Sheikh Mujibur Rehman in 2020 and the 50th anniversary of Bangladesh's Liberation in 2021.

The two leaders also agreed to identify dates for a meeting at the earliest, to resume work in service of the bilateral relationship.

Earlier, in her congratulatory message to PM Modi, Prime Minister Hasina said, "On behalf of the Government and the people of Bangladesh and on my own behalf, I extend my heartiest congratulations to you on the resounding victory of the National Democratic Alliance (NDA) led by Bharatiya Janata Party (BJP) under your dynamic leadership in the 17th Lok Sabha elections in India."

"This emphatic verdict is a reflection of the trust and confidence reposed on you by the people of the world's largest democracy."

She said that Bangladesh attaches highest importance to its multi-faceted relations with India which is driven by genuine goodwill, mutual trust and respect.

India''s critical role in support of Bangladesh's War of Independence under the leadership of the Father of the Nation, Bangabandhu Sheikh Mujibur Rahman in 1971 was a watershed moment in the relations, she said.

"I strongly believe that with the renewed mandate given to both of us by our respective peoples, Bangladesh-India ties, which have already been termed as a role model of good neighbourliness, will be further consolidated and our relations will scale newer heights," Sheikh Hasina said.