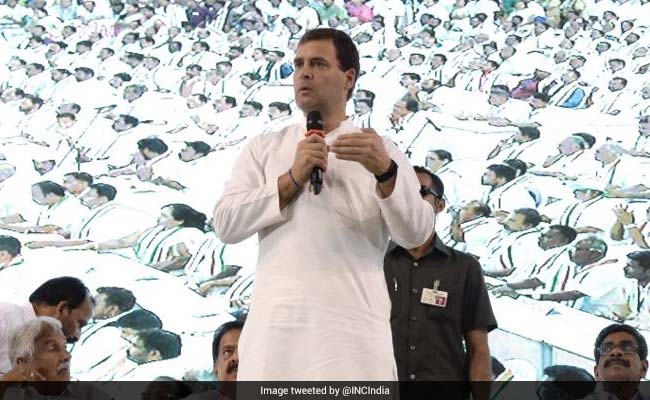 He will then head to Kerala's Kasargod, where he will meet the families of two other killed youth Congress workers, Kripesh and Sarathal, allegedly killed by CPM workers last month.

After this, he will hold a public rally at around 4.30 pm in Kerala's Kozhikode. He will address a gathering at Janmaharali at Kozhikode beach.

Here are the highlights on the political developments of the day:

Read Here: "Must Be Headline In Pakistan": BJP Hits Back After Rahul Gandhi's "Modi Scared Of Xi" Dig
Congress chief Rahul Gandhi's jibe at Prime Minister Narendra Modi over China's move to block the global terrorist tag for Jaish-e Mohammad chief Masood Azhar has brought a prompt response from the BJP. "China wouldn't be in UNSC had your great grandfather not 'gifted' it to them at India's cost," the BJP tweeted, referring to India's first Prime Minister Jawaharlal Nehru.
Mar 14, 2019 13:44 (IST)

When government is taking 28% tax from fishermen, it is Gabbar Singh who is taking your money. We will reform GST and make it simple: CP @RahulGandhi#RahulGandhiWithFishermenpic.twitter.com/TfUEVFpeyn

Mar 14, 2019 12:38 (IST)
Lok Sabha Election 2019: "Foreign policy is not determined by tweeting": BJP hits out at Rahul Gandhi over Masood Azhar
"I want to ask Rahul Gandhi, China had blocked bid even in 2009, when his party was in power. At the height of Doklam crisis, he met Chinese envoy. He met them when he went to Mansorovar. If you are so close to the Chinese establishment, then you should have used your relations to get the resolution passed. He should know foreign policy is not determined by tweeting," Ravi Shankar Prasad said.
Mar 14, 2019 12:34 (IST)
Lok Sabha Election 2019: "Why is Rahul Gandhi in a celebratory mood?": Ravi Shankar Prasad hits out at Rahul Gandhi
"Would the Congress adopt a diff voice even in case of a cruel killer or a global terrorist like Masood Azhar," said minister and senior BJP leader Ravi Shankar Prasad.

"You all have seen Rahul Gandhi's tweet on Masood Azhar," he said.


"Why is Rahul Gandhi in his celebratory mood when country is pained by China's attitude," he added.

Read Here: Can Cause Problems, Have Experience: Shiv Sena Cautions BJP On Turncoats
The Shiv Sena on Thursday asked ally BJP to be cautious while inducting leaders from opposition parties, saying doing so may pose problems in future.
Mar 14, 2019 12:21 (IST)
Rahul Gandhi Kerala Visit: "When the nation needs you, you are there, but the sad part is when you need India, India is not with you": Rahul Gandhi to fishermen
"Our fishermen have been facing a great challenge from Sri Lanka. Many of our colleagues have been arrested and they are yet to see the light of day," a fisherman from Tamil Nadu asked Rahul Gandhi at the fishermen's parliament.

"For India the most important thing is to give voice for the people. In today's government Ambani and Nirav Modi has a lot of voice and they can send the message in 10 secs. They can even whisper. But the farmers small businesses men, fishermen have to make a lot of noise to reach the PM," Rahul Gandhi replied to the fisherman.

"For example when the cyclone come the fishermen who goes and save people. But it's not your job but navy and coastguard's. But when the nation needs you, you are there, but the sad part is when you need India, India is not with you. The impact is borne by you," said Rahul Gandhi.

"You are facing issue with Sri Lanka. Trawlers and new sea rules. I want to give you a big solution. I want to give your own amplifier. So that you need something your voice is heard in Delhi. The solution is your own ministry in Delhi. Somebody has to represent you in Delhi. My commitment to you is that the moment we win in Delhi you will have your own ministry," said Rahul Gandhi.
Mar 14, 2019 12:06 (IST)
Rahul Gandhi Kerala Visit: Rahul Gandhi replies to fisherman asking about a boat missing for 89 days from the Karnataka coast
"A boat has been missing from Karnataka coast for 89 days with 7 fishermen, centre hasn't done anything. PM says he will send Army but hasn't done anything, he claims he has crossed the boarder and bombed terrorist in Pakistan but what about the people from our country," a representative for the fishermen from Karnataka asked Rahul Gandhi in the fishermen's parliament.

We want to honour all those fishermen. We have decided that the best way to honour them is to have a dedicated ministry for fishermen in Delhi: CP @RahulGandhi#RahulGandhiWithFishermenpic.twitter.com/nhf6ghP6SY

Mar 14, 2019 11:03 (IST)
Rahul Gandhi in Kerala: Rahul Gandhi has reached Thripayar to address the fishermen's parliament
Rahul Gandhi has reached Thripayar in Kerala, to address the fishermen's parliament.
Mar 14, 2019 10:10 (IST)
Rahul Gandhi attacks PM Narendra Modi over Masood Azhar in a tweet
Rahul Gandhi tweeted criticism on PM Narendra Modi today, over China blocking the initiative to tag Jaish-e-Mohammad chief Masood Azhar as a "global terrorist" by the United Nations Security Council on Wednesday.
In the tweet, Rahul Gandhi said, "Weak Modi is scared of Xi. Not a word comes out of his mouth when China acts against India."

Weak Modi is scared of Xi. Not a word comes out of his mouth when China acts against India.

1. Swing with Xi in Gujarat

Read Here: Lok Sabha Elections 2019: "Can You Call Me Rahul?" Chennai College Student Told
Rahul Gandhi, in his outreach in Chennai today as part of his campaign for next month's national election, addressed hundreds of students at a college and urged them to ask him "only difficult" questions. "Can you call me Rahul instead of sir," he said as a student rose to ask him a question.
Mar 14, 2019 08:46 (IST)

Read Here: "Investigate Robert Vadra But Don't Be Selective": Rahul Gandhi
In an interaction with students in Chennai, Rahul Gandhi today referred to the investigation against his brother-in-law Robert Vadra and said, "The government should not be selective". Prime Minister Narendra Modi should also be investigated in the Rafale jet deal, said the Congress President.
Mar 14, 2019 08:45 (IST)

Read Here: "PM Was Talking About How Filthy We Were": Rahul Gandhi Remembers His Hug
Congress chief Rahul Gandhi on Wednesday said Prime Minister Narendra Modi is "so angry" that he is "unable to see the beauty of the world" and that is what made him hug him in parliament, recalling one of the most memorable moments in politics last year during a breezy interaction with students in Chennai.
Mar 14, 2019 08:44 (IST)

Read Here: "Rahul Gandhi Will Be PM, Country Will Be Safe In His Hands": MK Stalin
DMK chief MK Stalin, who had earlier backed Rahul Gandhi for opposition's prime ministerial candidate, today predicted the Congress chief will become the prime minister after the Lok Sabha elections and that the country will be safe in his hands.
Mar 14, 2019 08:43 (IST)
Rahul Gandhi In Kerala today, wil address fishermen's parliament, meet families of killed Congress workers and hold a public rally