Speaking on women empowerment, as he addressed students in Chennai, he said "Women should not be considered second to men in anything". 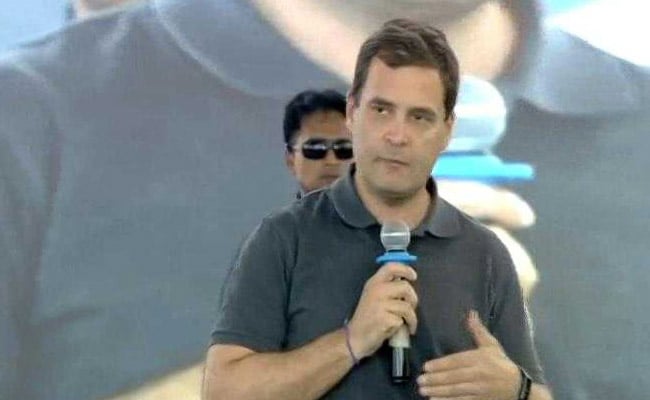 Rahul Gandhi was dressed in casuals for the Chennai event.

Congress Chief Rahul Gandhi on Wednesday promised 33 per cent reservation for women in government jobs and parliament if the party is voted to power in national elections.

Speaking on women empowerment as he addressed students in Chennai, he said: "Women should not be considered second to men in anything".

"In 2019, we are going to pass women's reservation bill in Lok Sabha and vidhan sabhas. We are also going to reserve 33 per cent of jobs reserved in government jobs for women, " he said.

A lot needs to change as far as attitude to women is concerned, he stressed, as he spoke before an enthusiastic crowd.

A video, shared on Congress Twitter handle with the hashtag #VanakkamRahulGandhi, showed him speaking to an enthusiastic gathering. He was dressed in casuals - a grey t-shirt and denims

Women should be at the same level as men. Frankly, I don't see enough women in leadership positions. We are going to pass the Women's Reservation Bill in the Parliament and we are going to reserve 33% of govt jobs to women: CP @RahulGandhi#VanakkamRahulGandhipic.twitter.com/m43D6UUmVo

"We assure the women of India that we will stand with them and we will do everything in our power to empower them and ensure they get their rightful place in our democracy and economy," Mr Gandhi said as he went on to say that women should be "fearless in claiming their space".

"Believe in yourself, be humble... When someone throws hate at you, catch the hate, put it down, and give love in return, he suggested the women in the crowd.

He also said that he has imbibed humility from his mother, Sonia Gandhi.

Mr Gandhi had made similar remarks at an event last week in Odisha. "You must fight for your space and don''t consider yourself lesser than a man. Women should fight for due place - be it the Assembly, Lok Sabha or the business field," he said responding to a query.

The passage of women's reservation bill has been on halt since the last nine years.

While the Congress is trying to highlight the issue ahead of the national elections, to be held in seven phases from April 11, West Bengal Chief Minister Mamata Banerjee, last week, referred to the bill in a tweet saying: "While the Women's Reservation Bill has not yet been passed in #Parliament, I am proud that our party @AITCofficial has 35% women MPs in the 16th Lok Sabha. We have also reserved 50% seats in local bodies for women candidates.(sic)"