"Everything At Stake": Lalu Yadav's Message To Bihar Before Elections

In an open letter to the people of the state, Lalu Yadav said "in the election this time, everything is at stake, country, society, Lalu in other words one who gave you the aspiration to move about as equals with your heads held high and your rights, self-respect and dignity, are all at stake." 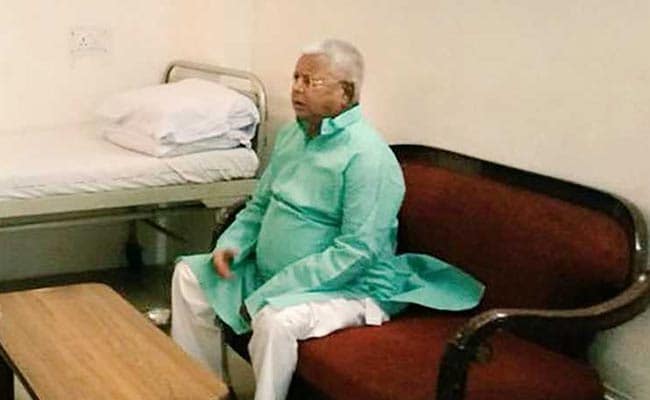 RJD supremo Lalu Yadav, who is serving sentences in fodder scam cases, told the people of Bihar that they needed a spirit of "do or die" in the fight to drive away "anti-reservation and anti-Constitution Narendra Modi."

In an open letter to the people of the state, which was released in Patna by his party after the Supreme Court dismissed his plea for bail, Mr Yadav said "in the election this time, everything is at stake, country, society, Lalu in other words one who gave you the aspiration to move about as equals with your heads held high and your rights, self-respect and dignity, are all at stake."

"Sitting alone in a Ranchi hospital," he wondered "whether disruptive forces by getting me imprisoned in this manner will again succeed in scripting any conspiracy in Bihar."

"I am imprisoned, not my thoughts," he said adding that he was sharing his thoughts because only by doing so "we can fight against these divisive forces."

Mr Yadav said the people knew from media reports "how the Modi government tried to finish your reservation. How our Dalit brethren's son Rohith Vemula was forced to commit suicide. How persecution of Dalits was encouraged and how efforts were made to weaken the law against atrocities on Scheduled Castes and Scheduled Tribes."

"Had you Dalit Bahujan friends not hit the streets, fully united, and raised a hue and cry the Modi government had resolved to end your reservations and your rights," Mr Yadav alleged referring to the nationwide agitations that had erupted last year after the SC/ST Act was diluted by the Supreme Court.

What was most important to think in this context is that "if these anti-Dalit Bahujan people again by manipulation came to power what will be your status in the country ... they would like to push your identity into 30-35 years old condition," the RJD supremo said.

Mr Yadav said "When you demand your share in power at Patna and Delhi and in resources of the country on the basis of your population it troubles them."

"This time the enemy is testing your strength, sometime by giving reservations to the upper castes without any documents and surveys, at other times by changing the roster system or by weakening the law against atrocities on SCs and STs," Mr Yadav said adding that this was "an hour to fight with unity."

Referring to seat sharing in the "Mahagathbandhan", he appealed to several of our leaders and workers who could not get tickets to save the reservation of the Dalit Bahut samaj and the Constitution by getting united and forgetting everything else.