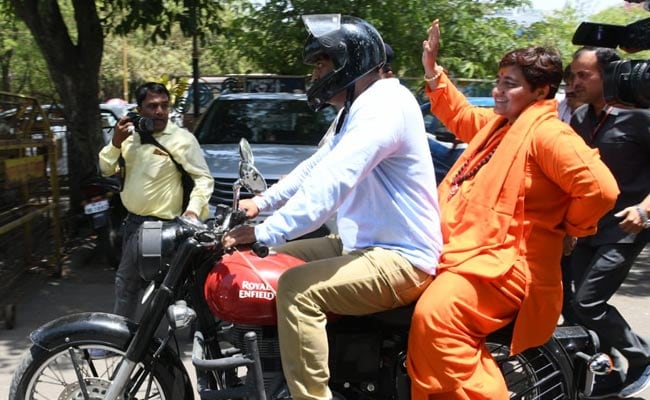 In a recent election rally in Jharkhand, Prime Minister Narendra Modi had dared the Congress to contest the remaining two rounds of polling on the Bhopal gas tragedy and Bofors case. However, when Pragya Singh Thakur, the BJP's controversial candidate from the Madhya Pradesh capital, released "Sankalp Patra" or vision document on Wednesday, there was no mention of the 1984 tragedy that have affected thousands of people over the decades.

A report released by the UN labour agency International Labour Organization (ILO) last month said in 1984, at least 30 tons of methyl isocyanate gas, which was released from the Union Carbide pesticide plant in the Madhya Pradesh capital, affected more than 600,000 workers and nearby inhabitants. Thousands had died due to the toxic gas.

Pragya Thakur, an accused in the Malegaon blasts case, released the vision document in the presence of national vice president Vinay Sahasrabuddhe and sitting BJP parliamentarian from Bhopal seat Alok Sanjar. When NDTV asked the reason for the absence of the issue on the document, she said it was not the final version.

"This isn't the full local manifesto, as more development promises, including those pertaining to welfare of victim families of the 1984 Bhopal Gas Disaster will soon be included in this vision document. Since there was auspicious period today, hence we came out with this Sankalp Patra, which is yet to include several more issues," she said.

A page in the four-page document is dedicated to highlighting the alleged failures of the Congress government in the state, which was led by her opponent Digvijaya Singh. The other pages contain the achievements of the BJP government that ruled the state for three terms. There is a page in which she has listed what she plans to do for the city. Her promises include starting international flights from Bhopal as well as connecting the city with more cities of the country through the air route.

After releasing the "Sankalp Patra", Pragya Thakur embarked on  her drive to connect door-to-door with people of Bhopal-Sehore constituency. Instead of using big chariot-like vehicle on broad roads, she rode pillion on a motorcycle.

When NDTV asked if her health condition would allow her take a 'Bullet' ride, she said, "It's also a new experiment for me, I am trying to reach out to my voters. If my health permits, I'll go."