The BJP and its ally, Apna Dal, had won 73 of the 80 Lok Sabha seats in Uttar Pradesh in 2014 and five years on, Amit Shah's party hopes to increase its tally in the state. 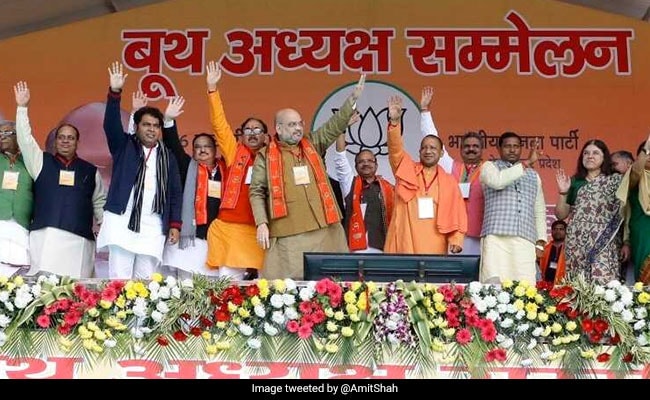 Addressing a meeting of the booth-level workers of the BJP in Uttar Pradesh's Aligarh, Amit Shah used the "Aligarh locks" coinage as the city was once known for the lock industry, which is now dying.

"BJP workers will put Aligarh locks on the shop of Bua-Bhatija," he said amid an applause from the gathering.

Amit Shah said reporters often asked him how the BJP hoped to win 74 Lok Sabha seats in Uttar Pradesh with the Samajwadi Party and the BSP joining hands.

"I tell them that if you see the sea of BJP workers, you will get to know where those 74 seats will come from," he added.

The BJP and its ally, Apna Dal, had won 73 of the 80 Lok Sabha seats in Uttar Pradesh in 2014 and five years on, Amit Shah's party hopes to increase its tally in the state.

Amit Shah asserted that the general election would be fought on the lines of Prime Minister Narendra Modi versus the rest.

The BJP had rid Uttar Pradesh of goons, he said, adding that Chief Minister Yogi Adityanath had successfully tackled the land mafia problem.

"Upar Modi, neeche Yogi (Modi as prime minister and Adityanath as chief minister). This general election will be Modi versus the rest. The BJP has rid Uttar Pradesh of goons, of parivarvad (dynasty). Yogi has tackled the land mafia in Uttar Pradesh. The goons are now scared of the police," Amit Shah said.

Yogi Adityanath, who was also present on the occasion, questioned as to why there was no quota for the Scheduled Castes (SCs), Scheduled Tribes (STs) and Other Backward Classes (OBCs) in the Aligarh Muslim University.

He accused the Congress of indulging in the politics of appeasement and dividing the country, adding that the Samajwadi Party and the BSP also supported it.

Amit Shah claimed that the BJP was different from other political parties as poll victories were guaranteed by the workers in the party and not on the basis of any leader.

"When BJP workers ask me about the Mahagathbandhan (the proposed Grand Alliance of opposition parties), I tell them it is a sham and there is no need to fear it. If Mamata Banerjee, Chandrababu Naidu come here to seek your support, will it make any difference? They are leaders only in their respective states," he said.

The BJP chief also claimed that even if "Rahul Baba" (Congress chief Rahul Gandhi) went with "Bua and Bhatija", the NDA's tally of seats in the state would go up (from 73 to at least 74).

"In 2017 (Uttar Pradesh Assembly polls), a similar alliance was forged and two boys (Gandhi and Yadav) from Uttar Pradesh had come together. At that point of time, I had declared that the BJP would win 300 plus seats and thanks to the hard work of our workers, we won 325," he said.

Lauding the state government for its campaign against land-grabbers, Amit Shah said, "Recently, 140 hectares of land in a tehsil have been freed from the goons of the SP and the BSP."

The infiltrators might be a vote bank for the Samajwadi Party and the BSP, but not for the BJP, Amit Shah added.

Taking a jibe at Rahul Gandhi, the BJP chief said, "Rahul Baba does not even know whether potatoes grow under or above the soil or are produced in factories and talks about farmers. Do you (Gandhi) know which is a kharif crop and which is rabi?"

Referring to the Ram temple issue, he said, "The BJP wants a grand Ram temple to be constructed at the same place at the earliest. To the Congress, SP and BSP, I would only say our stand is clear, you should come clean on your agenda on the issue. Whenever the case comes up for hearing (in the Supreme Court), a Congress leader, who is also a lawyer, seeks one date after another. Recently, the Ram Janmabhoomi Nyas had sought 42 acres of land from the government for the construction of the Ram temple (in Ayodhya). The BJP government at the Centre decided to give back the (surplus) land to the Ram Janmabhoomi Nyas, which was acquired by the Congress government in 1993."

"If Mamata Banerjee thinks that by denying permission to the BJP to hold its programmes in West Bengal, she will be able to stop the party from forming the government there, then she should clearly listen with ears open that BJP workers will demolish the TMC (Trinamool Congress). The BJP will win 23 of the 42 Lok Sabha seats in West Bengal," he said.