"Let Scientists Be": Minister Who Dissed Darwin Theory Told Off By Prakash Javadekar

Prakash Javadekar said there are no plans for a national seminar to prove Darwin wrong. 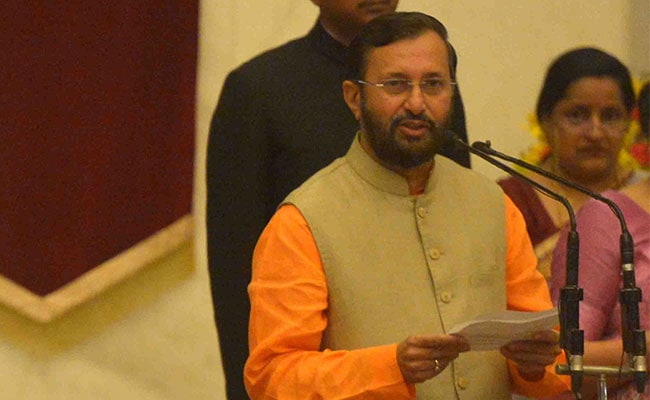 Prakash Javadekar said he has asked Satyapal Singh to refrain from making such comments. (File)

New Delhi: Union Human Resource Development Minister Prakash Javadekar today said he had asked his minister of state Satyapal Singh to refrain from making comments on issues such as Darwin's evolution theory. Mr Singh had, at an event in Aurangabad last week, said that that Charles Darwin's theory of evolution was "scientifically wrong" and needs to be changed in school and college curricula.

Intervening in the row over the remarks, Mr Javadekar said there are no plans for a national seminar to prove Darwin wrong.

"I have discussed the matter with my MoS and I have asked him to refrain from making such comments. We should not dilute science. This is the advice I have given him," Mr Javadekar told PTI.

"We are not going to fund any event or don't have any plan for a national seminar to prove Darwin wrong. It is the domain of scientists and we should let them free to continue their efforts for progress of the country," he added.

Following his statement on Darwin's theory, Mr Singh had also called for an international debate on the issue to decide if it merits a place in school textbooks.

"There is hardly any evidence to substantiate the theory. Great scientists of the world came out to say there is no evidence available in the world which can prove the theory of evolution is correct," the minister had claimed.

Promoted
Listen to the latest songs, only on JioSaavn.com
"I propose, if the Ministry of Human Resource Development is ready to sponsor a world-level international conference to decide what is true and factual and that must be taught in schools and colleges," he added.

Mr Singh had said our ancestors have nowhere mentioned that they saw an ape turning into a man, thereby casting doubts on Darwin's evolution theory.
Comments
Prakash JavadekarDarwin's theory