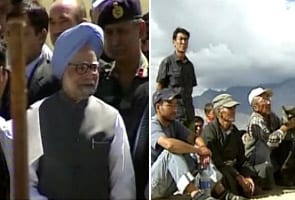 Leh: Prime Minister Manmohan Singh announced a Rs 125 crore relief packaged for the Leh cloudburst victims and said all houses destroyed by the natural calamity will be reconstructed within the next two-and-a-half months.

Singh, who arrived in Leh on a day-long visit to take stock of relief and rehabilitation undertaken in the aftermath of flash floods in this mountainous region, said relief will be given from the Prime Minister's National Relief Fund.

"Hospital, school, electricity connections and roads will be rebuilt and all rehabilitation works will be completed within the next two-and-a-half months and before the onset of winter. Funds will not be a problem," he said.

Singh said many lives have been lost during the tragedy which is irreparable but the Central and Jammu and Kashmir governments will take all possible measures to help the bereaved families.

The Prime Minister said a monitoring committee under the chairmanship of state Chief Secretary will be constituted to ensure effective implementation of various schemes for the affected people.

"Before the onset of winter, I will again visit you and inspect the houses that will be constructed for you," he said.

Singh also held a meeting with Chief Minister Omar Abdullah and state officials to discuss the steps being taken for the relief and rehabilitation measures.

The Prime Minister had promised in his Independence Day address that every possible effort would be made to provide relief to those hit by the calamity.

Singh had earlier announced an ex-gratia relief of Rs one lakh each to the kin of the deceased and Rs 50,000 each to the seriously injured from the PM's National Relief Fund.
Comments
Leh flash floodsPM to visit LehRahul in Leh