The police, however, said only mild force was used as the protesters were blocking the highway. 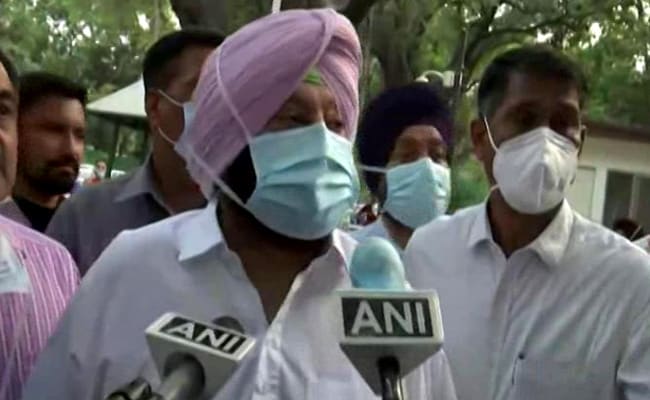 Amarinder Singh also expressed shock at the "brazen brutality" of the Haryana Police.

Punjab Chief Minister Amarinder Singh on Saturday termed the lathicharge on farmers in Haryana's Karnal a "government-sponsored attack" and said such a "vicious assault" was not only unacceptable but outright condemnable.

In a statement, Mr Singh also expressed shock at the "brazen brutality" of the Haryana Police.

Around 10 people were injured on Saturday as police allegedly lathi-charged a group of farmers disrupting traffic movement on a highway while heading towards Karnal to protest against a BJP meeting attended by Haryana Chief Minister Manohar Lal Khattar, state BJP president Om Prakash Dhankar and other leaders.

The police, however, said only mild force was used as the protesters were blocking the highway.

Mr Singh said this was not the first time that farmers had been subjected to such ruthlessness at the hands of the Haryana Police.

He said it was evident that the BJP-led Haryana government had once again deliberately used brute force against farmers in a desperate bid to end their agitation against the "draconian" farm laws.

Earlier in November 2020, the Haryana Police had "ferociously assaulted" farmers to stop them from marching to the borders of Delhi to join the agitation against the farm laws, he added.

"Such Khattar government-sponsored attacks on farmers are not only unacceptable but outright condemnable," Mr Singh said, demanding an apology from Mr Khattar and aid for the injured farmers.

"This is no way to treat our annadatas," he said.

Singh said the BJP would have to face the consequences of such "horrendous" actions and the Centre's apathy towards farmers in the next year's assembly elections in Punjab and other states.

The people of India will not forgive the BJP for its shameful treatment of farmers, many of whom have lost their lives during the agitation against the farm laws at Delhi borders, he added.

Farmers protesting against the centre's three farm laws have been opposing the public functions of the ruling BJP-JJP combine in Haryana.

On Saturday, several farmers had gathered at the Bastara toll plaza near Karnal in response to a call given by the Bharatiya Kisan Union.