Latest News Live Updates: For the current survey, scientists had collected the samples of over 25,000 people from various districts across the city.

Latest News LIVE: Delhi has a population of more than two crore, spread across 11 districts. (File)

Delhi is moving towards herd immunity from coronavirus, with 50 to 60 per cent of people in one district having developed antibodies to the virus, the latest round of sero-survey has found, sources said. Herd immunity is what the authorities are trying to achieve with the vaccination programme, in which a critical mass of immune people can stop the spread of the virus by breaking the chain of transmission.

Delhi has a population of more than two crore, spread across 11 districts. For the current survey -- conducted by the Delhi government in association with the National Centre for Disease Control -- scientists had collected the samples of over 25,000 people from various districts across the city.

Official figures from the health ministry say only 6.33 lakh people have been found infected in Delhi. But the survey indicates that the total figure could be more than 1 crore, sources said.

Meanwhile, ahead of their proposed tractor parade on Republic Day, protesting farmer Unions Monday announced they will march towards Parliament from different locations on February 1 when the annual Union Budget is scheduled to be presented.

Darshan Pal of the Krantikari Kisan Union said the protesting farmers remain firm in their stand of repealing the three new farm laws and their agitation will continue till their demands are met.

"We will march towards Parliament on foot from different locations on the budget day on February 1. As far as tomorrow's tractor rally is concerned, it will give the government an idea of our strength and they will know the agitation is not just limited to Haryana or Punjab but it is an agitation of whole of the country," he said.

Janata Dal United on Monday became the first major party in Bihar to have its own mouthpiece, that will be published monthly both in Hindi as well as English, reported news agency PTI.

"The farmers had been protesting peacefully at the Delhi border for two months without resorting to any such acts. AAP workers present near the Kisan Sansad attacked and manhandled Ravneet Singh Bittu and Kulbir Singh Zira. AAP, and not farmers, are responsible for the attack," said Amarinder Singh while speaking to the media in Patiala.

He claimed that the only agenda of AAP is to weaken the farmers' fight by creating trouble at the behest of the BJP. "They (AAP) should understand that this country is thriving on "lokshahi" (democracy) and not "dhakashahi" (push and shove)," said the Chief Minister.

Biden on Monday is also reimposing an entry ban on nearly all non-U.S. travelers who have been in Brazil, the United Kingdom, Ireland and 26 countries in Europe that allow travel across open borders.
Jan 25, 2021 15:47 (IST)
COVID-19 test positivity rate going up in Kerala, virus spread beyond control, says Indian Medical Association official
The coronavirus test positivity rate in Kerala is going up and the spread of the virus in the state is "beyond control", said Dr Rajeev Jayadevan, Scientific Advisor, Indian Medical Association (IMA), Kerala on Monday.
He added the Intensive Care Units (ICU) dedicated to COVID-19 patients in the state are also getting full, ANI reported.
Jan 25, 2021 15:27 (IST)
Just In: Government warns of penal action against those who spread false information about Covid-19 vaccines
Jan 25, 2021 15:02 (IST)

Tata In Talks To Launch Moderna COVID-19 Vaccine In India: Report
Tata Group's healthcare venture is said to have started initial discussions with Moderna Inc for a partnership to launch its COVID-19 vaccine in India, the Economic Times reported on Monday."
Jan 25, 2021 13:57 (IST)

#Coronavirus Facts vs Myths | Q: Is the vaccine only for corona positive people or for everyone?

A: The vaccine is for everybody who is eligible, not just for those who are or were #Covid19 positive. pic.twitter.com/PfoNyBdNW9

Jan 25, 2021 13:34 (IST)
Beant Singh Assassination Case: Top Court gives 2 weeks to centre to On killer's mercy plea
The Supreme Court today gave the Central government a last chance of two weeks to decide on the mercy plea of Balwant Singh Rajoana, a convict in the case of the assassination of former Punjab Chief Minister Beant Singh in 1995.
The top court had earlier, too, pulled up the Centre for dithering on the matter. In a hearing on December 4, 2020, it had cited a letter written by the Union Home Ministry to the Punjab government in September 2019, in which the government said that a proposal to commute Rajoana's death sentence would be sent to the President. (Read full story here)
Jan 25, 2021 13:02 (IST)

"The work you have done is special because it happened during the #Covid19 pandemic": PM Modi at his address to this year's Bal Puraskar winners pic.twitter.com/QAEeHBR03R

Jan 25, 2021 12:19 (IST)
Farm laws news: Mayawati requests Centre to withdraw farm laws ahead of Republic Day celebrations
Ahead of Republic Day celebrations, Bahujan Samajwadi Party chief Mayawati on Monday requested the Centre to withdraw the farm laws so that no untoward incident takes place in the national capital.
In a tweet in Hindi, Mayawati said, "To fulfill the demands of the agitating farmers, BSP requests the Central Government to withdraw these farm laws. I hope that no new tradition starts on Republic Day and there is no untoward incident in the national capital."
Farmers from all across the country are expected to march towards Delhi in order to take part in the scheduled rally. Tractors from Punjab, Haryana and Rajasthan have reached on Tikri border as the farmers sit in for protest for nearly two months.
Jan 25, 2021 11:59 (IST)
ISI-Khalistan Conspiracy To Disrupt Farmers' R-Day Tractor Rally: Sources
Pakistan-based ISI (Inter-Services Intelligence) and "rogue elements linked to Khalistani outfits" are likely to hijack and disrupt the tractor rally planned by farmers in Delhi tomorrow to intensify their agitation against the new farm laws, sources in the Delhi Police have said, stressing that "a huge conspiracy has been hatched". The farmers' bodies have been asked to stay alert after they were allowed on Sunday to take out the rally on Republic Day. (Read full story here)
Jan 25, 2021 11:52 (IST)

Watch | Oxfam releases Global Inequality Report; India's billionaires got richer by 35% during the lockdown even as the economy struggled to get back on track pic.twitter.com/ApgJ98U4r2

Of the 13,203 coronavirus cases reported in India in the last 24 hours, 6,036 cases or nearly 45 per cent of the infections were reported from Kerala.
At least 11 districts in the southern state, including state capital Thiruvananthapuram, are among the top 20 district that continue to report high number of daily infections in the country, sources in the Health Ministry told NDTV.
"Apart from Thiruvananthapuram, Ernakulam, Alleppey, Kottayam and Pathanamthitta have been reporting high number of infections," they said, citing lack of contact tracing and low number of testing as the main reason for the increase in Covid cases in the state. (Read full story here)
Jan 25, 2021 11:04 (IST)

Of the 13,203 coronavirus cases reported in India in the last 24 hours, 6,036 cases or nearly 45 per cent of the infections have been reported from Kerala.

At least 11 districts in the southern state, including state capital Thiruvananthapuram, are among the top 20 district that continue to report high number of daily infections in the country, sources in the Health Ministry told NDTV.

"Apart from Thiruvananthapuram, Ernakulam, Alleppey, Kottayam and Pathanamthitta have been reporting high number of infections," they said, citing lack of contact tracing and low number of testing as the main reason for the increase in Covid cases in the state.

Jan 25, 2021 09:48 (IST)
JUST IN: 13,203 fresh COVID-19 cases in India, 11% lower than yesterday; 1.06 crore total cases, 1,53,470 deaths
Jan 25, 2021 08:54 (IST)
Coronavirus news: Mexican president Lopez Obrador says he has COVID-19
Mexican president Andres Manuel Lopez Obrador announced Sunday that he was infected with the coronavirus, but said his symptoms are mild and he feels optimistic.
"I regret to inform you that I am infected with Covid-19. The symptoms are mild but I am already undergoing medical treatment," the 67-year-old said in a message on social media.
"As always, I am optimistic," added the leftwing populist, who is rarely seen wearing a mask in public and has kept up most of his activities during the pandemic.
Lopez Obrador said that he would continue to work from the presidential palace and delegated the interior ministry to represent him this week at his daily news conference.
Jan 25, 2021 08:46 (IST)
COVID-19: India recorded 14,849 fresh cases, 155 more fatalities on Sunday
India's COVID-19 caseload went up to 1,06,54,533 on Sunday with 14,849 people testing positive for the coronavirus infection in a day, while the number of recoveries has surged to 1,03,16,786, according to the health ministry.
The number of dead due to the viral disease has climbed to 1,53,339 with 155 more fatalities, the ministry''s data updated at 8 am showed.
The number of people who have recuperated from the disease has surged to 1,03,16,786, pushing the national COVID-19 recovery rate to 96.83 per cent, while the case fatality rate stands at 1.44 per cent.
The active COVID-19 caseload of the country remained below two lakh for the fifth consecutive day. 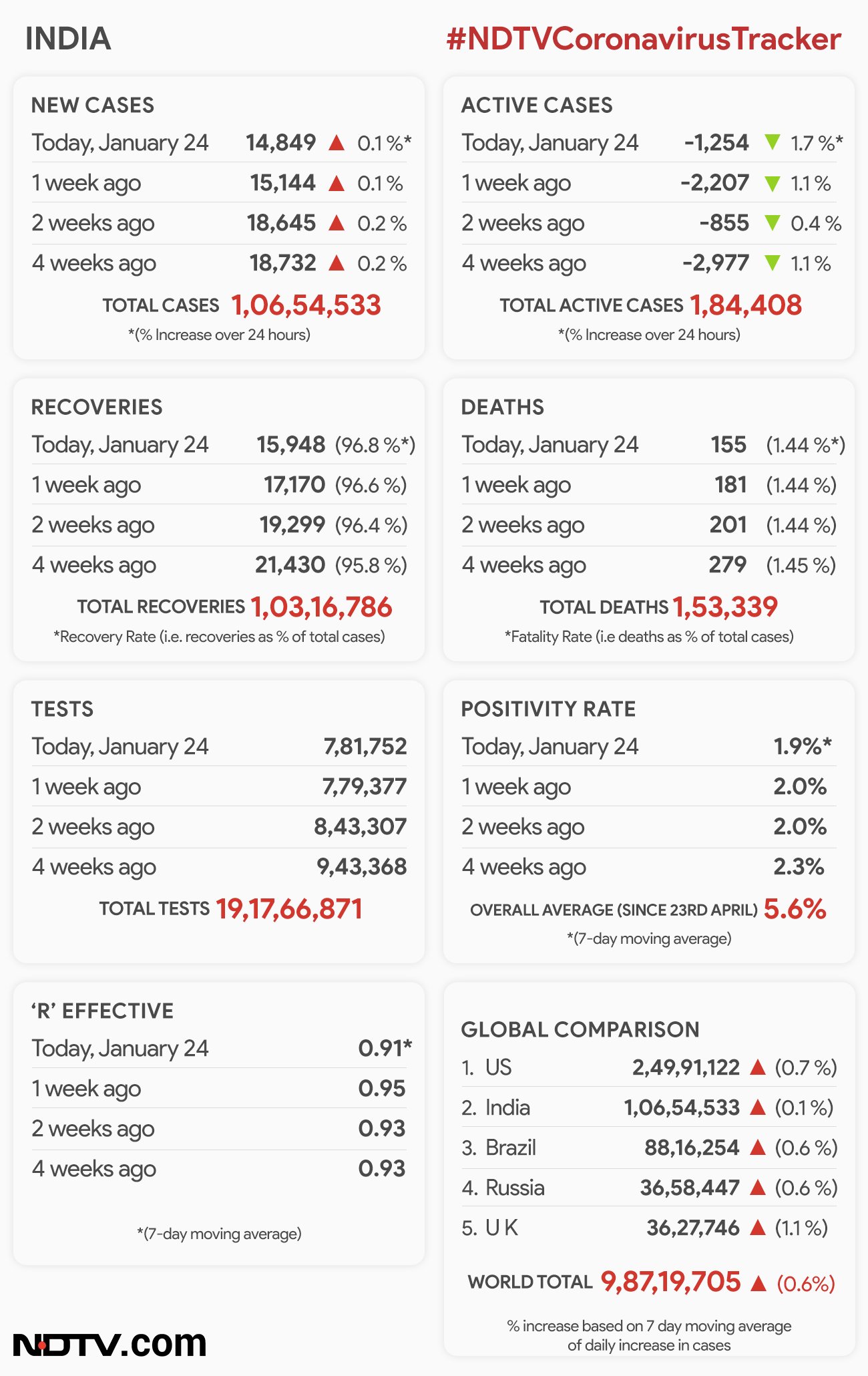 Jan 25, 2021 08:28 (IST)
Kerala Reports Highest Daily Covid Cases, Fatality Rate Among Lowest
Kerala continues to report the highest COVID-19 cases in India with the Test Positivity Rate at an high of 12 per cent as against the national average which stands at 1.9 per cent. The state government says COVID-19 cases in Kerala are at a plateau and the current numbers are not unexpected.
"The testing in Kerala is a concern and the Indian Medical Association (IMA) had earlier recommended that daily testing needs to be increased to around 1 lakh. But the per day testing still continues to be between 40,000 to 60,000," Dr Sulphi Noohu, member of IMA's central committee, said. (Read full story here)
Jan 25, 2021 08:06 (IST)

Thank You Bengal: Prime Minister Narendra Modi Tweets 6-Minute Video Of His Kolkata Visit On Netaji's Birth Anniversary. Watch
After his visit to Kolkata in West Bengal to pay tribute to freedom fighter Subhash Chandra Bose on his birth anniversary, Prime Minister Narendra Modi has shared a video on Twitter from the trip, thanking the state "for the overwhelming affection.""
Jan 25, 2021 07:59 (IST)

Will Quit If Centre Brings Law Against Dynastic Politics: Trinamool's Abhishek Banerjee
Trinamool Congress (TMC) MP Abhishek Banerjee on Sunday hit back at the BJP over accusations of nepotism in his party, daring the Centre to bring a legislation allowing only one member of a family in politics."
Jan 25, 2021 07:53 (IST)
As Covid Ravaged The World, Billionaires Got Richer By $3.9 Billion: Oxfam
The coronavirus pandemic has reinforced frightening income inequalities - and their consequent impact on access to education, healthcare and all hope of a better life - between the world's super-rich and the hundreds of millions of people who live and die in abject poverty, non-profit group Oxfam said Monday in a report to be tabled at the Davos summit in Switzerland.
The report - titled The Inequality Virus - is sharply critical of "flawed and exploitative economic systems... entrenched inequality and oppression, namely patriarchy and structural racism, ingrained in white supremacy" and identifies these as "the root causes of injustice and poverty". (Read full story here)
Jan 25, 2021 07:20 (IST)

Kerala Reports Highest Daily Covid Cases, Fatality Rate Among Lowest
Kerala has been reporting highest daily COVID-19 cases in the country for days. The positivity rate or the percentage of how fast an infection spreads is 12.48 per cent in Kerala, while the national average is 1.9 per cent, according to government data.