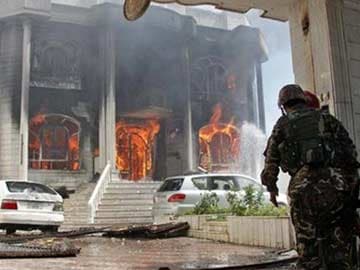 New Delhi: A Lashkar-e-Toiba hit squad was assigned to take hostages and lay siege on the Indian consulate in Herat, Afghanistan, to coincide with the grand oath ceremony of the Narendra Modi government in Delhi on May 26, security sources in the Indian establishment have now concluded after studying the pattern of attack and taking stock of the recovery from the operatives killed. (Indian Consulate Attacked in Afghanistan)

This confirms outgoing Afghan President Hamid Karzai's assertion that the Pakistan-based LeT had was behind the Herat attack.

The LeT hit-squad, highly-trained, heavily armed and intensely motivated, had attacked the Indian consulate in the western city of Herat, three days before Prime Minister Narendra Modi was to be sworn in. (BJP Condemns Attack on Indian Consulate in Afghanistan)

The group seemed to have come prepared for a long haul. Security sources said each of the four attackers carried AK 47 rifles and six magazines each. Two of them also carried under barrel grenade launchers or UGBLs and rocket propelled grenades or RPGs.

The attackers had two dual-sim-card enabled mobile phones, which had telephone numbers of the BBC, the Ariana TV station and the Indian embassy in Kabul. (LeT Denies it Attacked Indian Consulate in Afghanistan)

Each also carried fruits, nearly half a kg of dry fruits and water bottles.

Indian security officials who have visited Herat and reviewed the deployment of two dozen Indo Tibetan Border Police or ITBP personnel who guard the office-cum-residential compound, said the first attacker tried to scale the wall using an extendable 4 feet portable ladder, but an alert sentry killed him within a minute.

The exchange of fire began at about 4 am. ITBP jawans forced the attackers to take shelter in a building nearby and were soon joined by personnel of the Afghan National Army and the police.

The attackers were neutralised after almost eight hours of intense gunbattle. Investigators suspect one of them got away in the chaos; only three bodies were recovered.

Intelligence officials point out that the three attackers killed did not wear suicide vests, a Taliban trait. This, they say, further confirms them as highly-trained LeT operatives.

Promoted
Listen to the latest songs, only on JioSaavn.com
Intelligence reports have warned the Indian government of more possible attacks on Indian missions and assets since Pakistan's ISI is uneasy with the large-scale Indian presence in Afghanistan post the US' withdrawal at the end of the year.

A day after he was sworn in, Prime Minister Modi had held bilateral talks with Mr Karzai and Pakistan Prime Minister Nawaz Sharif, both invited to attend his oath ceremony. He had reportedly raised the Herat attack in his discussions with Mr Sharif.