Lalu Prasad Yadav, the former Bihar chief minister who was convicted in fodder scam cases, was undergoing treatment in the Rajendra Institute of Medical Science (RIMS) for multiple ailments. 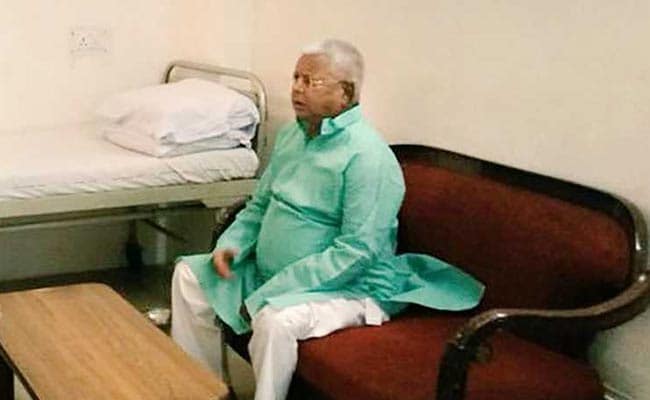 RJD president Lalu Yadav was on Thursday shifted from the director's bungalow of a Ranchi hospital to its paying ward on Thursday following his alleged phone call to a Bihar BJP MLA, seeking help in defeating the NDA candidate in the election to assembly Speaker's post, an official said.

Mr Yadav, the former Bihar chief minister who was convicted in fodder scam cases, was undergoing treatment in the Rajendra Institute of Medical Science (RIMS) for multiple ailments.

"Lalu Prasad Yadav was shifted from the bungalow of the director to room number A-11 of the paying ward today," Dr Waghmare Krishna Prasad, Additional Director of RIMS and Joint Health Secretary of Jharkhand, told PTI.

He was transferred from the paying ward of the RIMS to the residence of its director in August to protect him from exposure to coronavirus.

The Jharkhand government on Wednesday ordered a probe into Mr Yadav allegedly telephoning Bihar BJP MLA Lalan Kumar Paswan, asking him to abstain from voting during the Speaker's election on Tuesday.

Mr Yadav, who also served as the Railway minister in the UPA-I government, has been behind bars since December, 2017 in cases related to the fodder scam in the 1990s in undivided Bihar, when money was fraudulently withdrawn from treasuries in the name of supplying fodder to animals.