Appearing in the court of judge Satish Kumar Munda, Lalu Prasad Yadav confessed and accepted that he violated the model code of conduct. 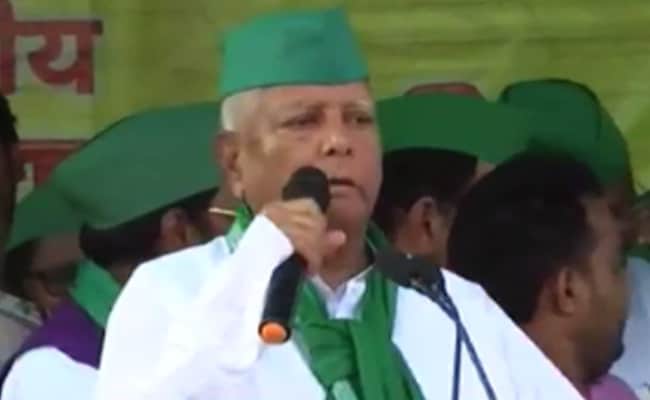 Lalu Prasad Yadav confessed and accepted that he violated the model code of conduct.

RJD chief Lalu Prasad Yadav was fined Rs 6,000 by a court in Jharkhand's Palamu district today for violating the model code of conduct during the 2009 assembly elections in the state.

Appearing in the court of judge Satish Kumar Munda, Lalu Prasad Yadav confessed and accepted that he violated the model code of conduct.

Judge Munda imposed a fine of Rs 6,000, which was deposited on behalf of Lalu Yadav.

Subsequently, the matter was disposed of.

While campaigning for the 2009 assembly elections, Lalu Prasad Yadav's chopper had landed in a paddy field in Garhwa allegedly owing to the mistake of the pilot instead of the helipad in Medininagar.

A case under IPC sections 188 (disobedience to order duly promulgated by public servant), 279 (rash driving or riding on a public way), 290 (punishment for public nuisance), 291 (whoever repeats or continues a public nuisance) and 34 (acts done by several persons in furtherance of common intention), and section 127 of Representation of People's Act that deals with disturbances at election meetings.

Lalu Prasad Yadav's counsel Prabhat Kumar said the case was later transferred to Ranchi and then to Medininagar.

The supporters of the former Bihar chief minister, who gathered outside the court, welcomed the verdict and garlanded their leader.

Sub-divisional police officer (SDPO) Surjit Kumar said tight security arrangements were made for Prasad in the court. Traffic was regulated in the area.

Lalu Prasad Yadav had arrived in Medininagar, the district headquarters of Palamu, on Monday for appearing before the court. During his stay at the circuit house, a fan in his room caught fire but was swiftly doused by his aides in a close shave for the 73-year-old leader.