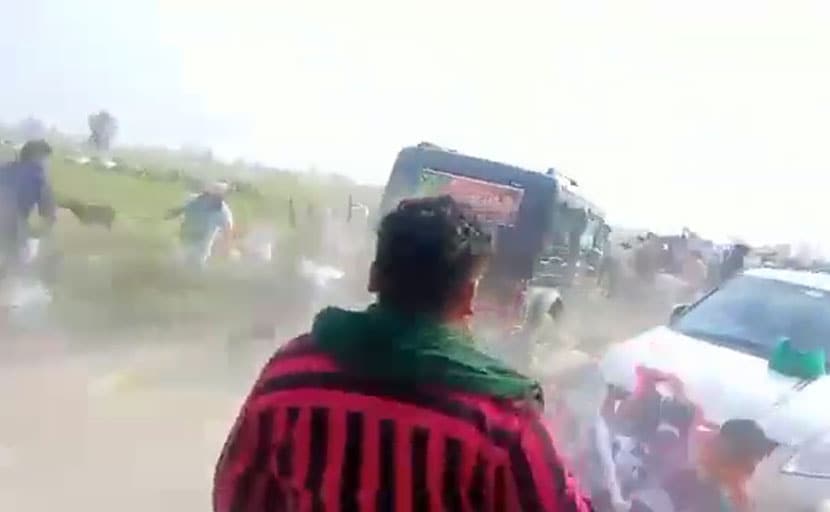 BJP MP Varun Gandhi on Thursday called for "accountability for the innocent blood of farmers" as he tweeted a longer and better quality video that reveals what happened at UP's Lakhimpur Kheri earlier this week - when a black SUV (confirmed by Union Minister Ajay Mishra as belonging to his family) ploughed through a group of farmers holding a peaceful protest.

"The video is crystal clear. Protestors cannot be silenced through murder. There has to be accountability for the innocent blood of farmers that has been spilled and justice must be delivered before a message of arrogance and cruelty enters the minds of every farmer," he wrote.

A member of the ruling BJP, Mr Gandhi has been fiercely critical of what happened at Lakhimpur Kheri on Sunday, during which eight people, including four farmers, were killed.

The video is crystal clear. Protestors cannot be silenced through murder. There has to be accountability for the innocent blood of farmers that has been spilled and justice must be delivered before a message of arrogance and cruelty enters the minds of every farmer. 🙏🏻🙏🏻 pic.twitter.com/Z6NLCfuujK

On Tuesday he shared a grainier version of the above video and wrote: "This video will shake anyone's soul". Mr Gandhi demanded UP Police take notice and make "immediate arrests".

"In Lakhimpur, the video that shows cars running over farmers will shake anyone's soul. Police should take note of this video and identify the owners of the car, those sitting in the car and others involved to make immediate arrests," the Lok Sabha MP from UP's Pilibhit tweeted in Hindi.

The day before that Mr Gandhi condemned those involved in the death of farmers and urged the government to be patient and restrained in its approach. He also wrote to UP Chief Minister Yogi Adityanath to ask for a CBI probe and Rs 1 crore compensation for the dead farmers' families.

The newer video of the incident - which emerged yesterday - seems to contest claims by Mr Ajay Mishra and his son Ashish that their SUV - a Mahindra Thar - was under attack by the farmers.

The video - which NDTV has not been able to verify - shows no stones or sticks being thrown - and that the car drove, seemingly deliberately, into protesters who had their backs to the vehicle.

Four farmers died as a result of the vehicle ramming into the group of protesters.

According to witnesses, it was after this an enraged mob attacked the cars and set them on fire.

Four people in the convoy of cars were beaten to death.

The farmers had gathered at Lakhimpur Kheri to protest the visit of Mr Mishra, who is the junior Union Home Minister, and UP Deputy Chief Minister Keshav Prasad Maurya.

Farmer groups have claimed Ashish Mishra was travelling in one of the cars in the convoy.

Both he and his father have denied this charge. Mr Mishra told NDTV that although the SUV belonged to his family, neither he nor his son were in it when the incident took place.

A murder case has been filed against Ashish Mishra but no arrests have been made as yet.

There have also been demands for Ajay Mishra to resign. Mr Mishra met his boss, Union Home Minister Amit Shah, yesterday, after which government sources ruled out any resignation.

Farmers across the country have been protesting the government's new farm laws - which they say will rob them of MSPs and leave them exposed to hostile corporate interests - for over a year.

The government has insisted the laws will be beneficial and has refused to roll them back.

Multiple rounds of talks have, so far, failed to break the deadlock.

Unfortunate That Only Few Aware Of Constitutional Rights: Chief Justice