This is the first time leadership from Muslim majority Kargil and Buddhist-dominated Leh has arrived at a consensus for their political future. 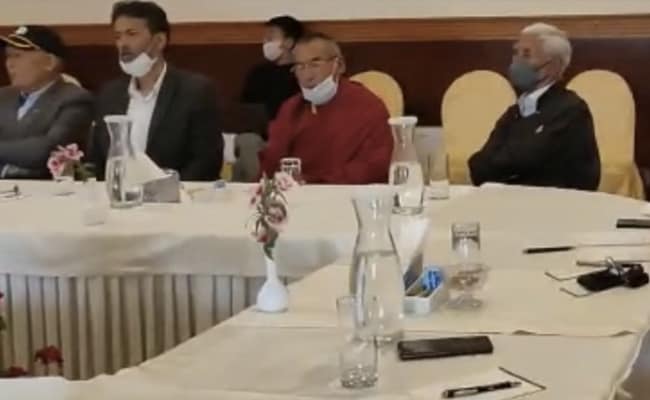 Leaders cutting across political parties in Ladakh have joined hands demanding restoration of full statehood for the region and rights like the ones guaranteed under Article 370 ahead of the second anniversary of the abrogation of Jammu and Kashmir's special status.

The leadership of both Leh and Kargil districts, including BJP-led Leh Autonomous Hill Development Council, has also rejected domicile for Ladakh region and asked for Permanent Resident certificate for people on the lines of state subject law in the erstwhile state of Jammu and Kashmir.

This is the first time leadership from Muslim majority Kargil and Buddhist-dominated Leh has arrived at a consensus for their political future. Chairman of the Leh autonomous Counci Tashi Gyaltson of BJP and Feroz Khan chairman of Kargil autonomous council attended the meeting on Sunday.

But days before the second anniversary of the move, BJP's own leadership in Ladakh has joined with other regional groups demanding statehood for Ladakh and other constitutional rights that people of the region were enjoying under J&K's special status.

This include land and job rights besides full statehood.

"Entire Ladakh stands united. We will press for our demands with the Central Government," said Leh Apex Body chief Thupstan Chewang who addressed the press confidence with leaders from Kargil Democratic Alliance.

The leaders said they will ask for a meeting with Prime Minister Narendra Modi and Home Minister Amit Shah and project their demands.

"The unanimous decision by Leh and Kargil leadership is clear message that UT status for Ladkah has failed. We want statehood and similar rights that were enshrined in article 370 and 35A," said Sajad Hussain Kargili, a member of Kargil Democratic Alliance.

The KDC has also filed petition before the Supreme Court challenging downgrading J&K to a Union Territory and scrapping its special status.

The demand has come in the wake of recent all-party meeting called by the Prime Minister with leaders from Jammu and Kashmir.

The Gupkar alliance, an amalgam of J&K's main regional parties like National Conference and PDP, have been demanding reversal of August 5, 2019 decision and restoration of constitutional and legal status of J&K.

The leaders of Ladakh region said the alliance between Kargil Muslims and Buddhist majority Leh for politics rights is a "historic day" in Ladakh.

"We are of the view that full-fledged statehood to Ladakh is the only solution to the problems which the people of Leh and Kargil districts have been facing since August 5, 2019" said Asgar Ai Karbalai, political leader from Kargil.

Under this provision no outsider can own land or claim jobs in the region.