In A First, Transgenders Take Holy Dip At Kumbh Mela

Dressed in saffron and red saris, they reached the river banks to take the ritual bath that Hindus believe will rid them of their sins, as devotees chanted religious hymns and thousands of people looked on. 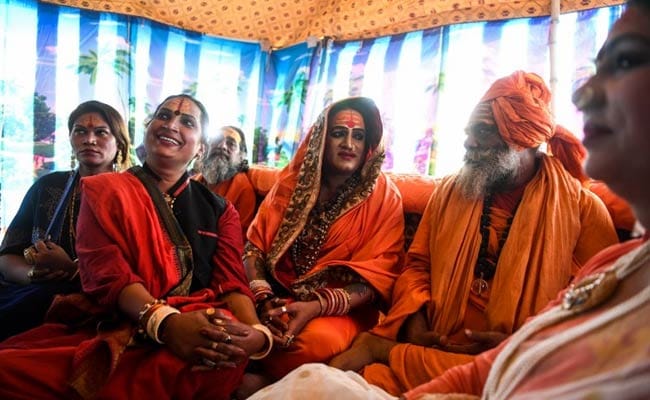 For decades Laxmi Narayan Tripathi has fought the conservative laws and beliefs to put her transgender community on a par with the rest of society, and now she has notched up a new milestone.

On Tuesday she and dozens of other resplendent "Kinnars" splashed in the sacred waters of the Ganges and Yamuna rivers alongside revered Hindu ascetics at the immense Kumbh Mela festival in northern India.

It was the first time that members of the estimated two-million-strong transgender community have been allowed to do so at the festival, the biggest religious gathering in the world that got under way this week.

Dressed in saffron and red saris, they reached the river banks to take the ritual bath that Hindus believe will rid them of their sins, as devotees chanted religious hymns and thousands of people looked on.

"For us, this participation is about mainstream society accepting us. The creator is within us and once we die, we will go back to him. Our doors are open for all," Tripathi told reporters last week. 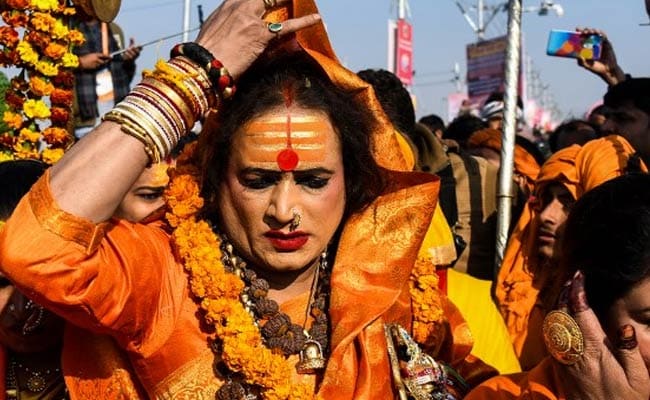 Our doors are open for all, Laxmi NarayanTripathi

Hijras, a term used in the country for transgenders and eunuchs, often live on the extreme fringes of society, with many forced into prostitution, begging or menial jobs.

But Hinduism has many references to transgenders, including gods and goddesses who belong to the third gender.

Over the centuries transgenders have assumed different roles in society, from royal courtesans to participants in birth ceremonies and other auspicious occasions.

They have waged a lengthy battle to protect their rights and end discrimination.

The Supreme Court recognized them as a third gender in a historic ruling, followed by a judgement last year that overturned a colonial-era law criminalising gay sex.

Tripathi, 40, heads Kinnar Akhara, a religious gymnasium or monastery for Sadhus or ascetics. It has however not yet won official recognition from the other groups.

"Establishing Kinnar Akhara aims to show the correct path to the next generation and to ensure that they do not face the stigma and discrimination we faced," Pavitra Nimbhorker, the group's secretary, told AFP.

The Kumbh Mela, which began on Tuesday, is expected to attract more than 100 million Hindus over the coming seven weeks to bathe at the confluence of the Ganges, Yamuna and mythical Saraswati rivers.