Kumbh Mela 2019: PM Narendra Modi offered his prayers at the Sangam, the holy confluence of the Ganges, Yamuna and the mythical Saraswati.

Prime Minister Narendra Modi today took a holy dip in the river Ganges during the ongoing Kumbh Mela in Uttar Pradesh's Prayagraj and offered his prayers at the Sangam, the holy confluence of the Ganges, Yamuna and the mythical Saraswati.

PM Modi wore a robe as he stepped into the water with folded hands in a specially marked area. He changed to a saffron kurta and shawl, and performed an aarti at the Triveni Ghat. Uttar Pradesh Chief Minister Yogi Adityanath accompanied PM Modi.

The Prime Minister prayed amid chanting of hymns and later offered some 'dakshina' to the priests.

"Had the good fortune of taking a holy dip at the #Kumbh. Prayed for the well being of 130 Crore Indians (sic)," PM Modi tweeted.

Had the good fortune of taking a holy dip at the #Kumbh. Prayed for the well being of 130 Crore Indians. pic.twitter.com/jTI2QbmWxb

A scared thread was tied to his right wrist as a symbol of blessings.

On February 14, BJP president Amit Shah took a holy dip at the Kumbh Mela. He also visited the Sangam and offered his prayers. He also performed an aarti at the Triveni Ghat. 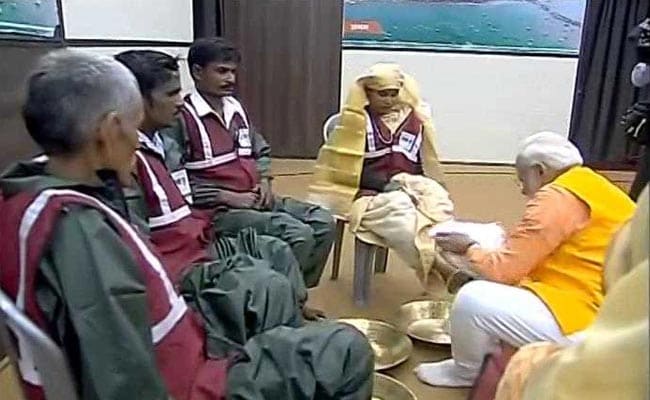 The Sangam is considered especially holy and Hindus believe bathing there during the Kumbh helps cleanse sins and brings salvation. Seas of pilgrims have set up camps or akhadas on the river banks.

A number of politicians, ministers and celebrities have visited the Kumbh Mela in the past few weeks. Smriti Irani, Yogi Adityanath and Akhilesh Yadav are some of the other leaders who shared pictures from their visit.

The Kumbh Mela draws tens of millions of pilgrims over the course of approximately 48 days to bathe at the Sangam.

The world's largest religious gathering began on January 15 on Makar Sankranti and will come to a close on March 4, on Mahashivratri day.