Look Who All Took The Holy Dip At Kumbh Mela

Uttar Pradesh Chief Minister Yogi Adityanath, Union minister Smriti Irani and Samajwadi Party chief Akhilesh Yadav are some of the leaders who have shared pictures of their visit to the Kumbh Mela 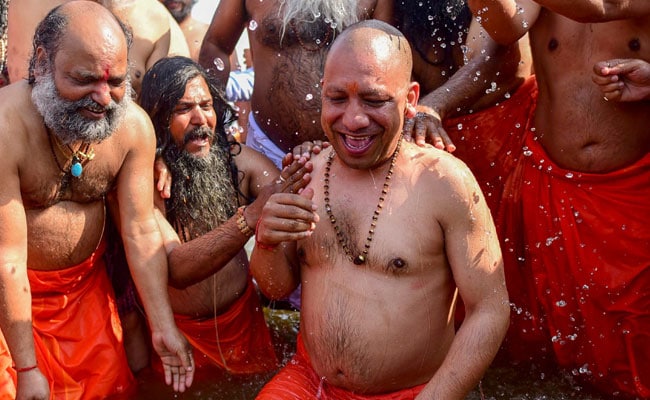 The Kumbh Mela at Prayagraj, held twice every 12 years, hosts crores of pilgrims who gather at the Sangam for a ritual dip in the sacred rivers. This year, a number of ministers and famous faces have already visited the Kumbh Mela. Uttar Pradesh Chief Minister Yogi Adityanath, Union minister Smriti Irani and Samajwadi Party chief Akhilesh Yadav are some of the leaders who have shared pictures of their visit to the 50-day-long religious festival and a holy dip at the Sangam - the confluence of the Ganga, Yamuna and the mythical Saraswati rivers in Prayagraj.

Yogi Adityanath held a cabinet meeting at the Kumbh Mela on Tuesday, and took a holy dip with his ministers after that. Deputy Chief Minister Keshav Prasad Maurya said apart from the ministers, ''sadhus" also took the holy dip.

Smriti Irani was among the first politicians to visit the Kumbh Mela. After a dip at the Ganga at the crack of dawn to mark the beginning of the Kumbh Mela on January 15, she tweeted a picture with the caption "Har Har Gange".

On Sunday, in a surprise visit to the Kumbh, Samajwadi Party chief Akhilesh Yadav also took a dip at the Sangam.

Reports say Congress president Rahul Gandhi's sister Priyanka Gandhi Vadra will take charge as party general secretary on February 4 after a holy dip at the Kumbh Mela. The Congress has not confirmed the reports.

The Kumbh Mela is among the world's largest religious gatherings. About 12 crore people are expected to visit the Kumbh between now and Maha Shivratri on March 4, when the Mela will come to a close.