The BJP leader also hit out at chief minister K Chandrasekhar Rao for abstaining from the prestigious meeting of heads of all political parties and chief ministers. 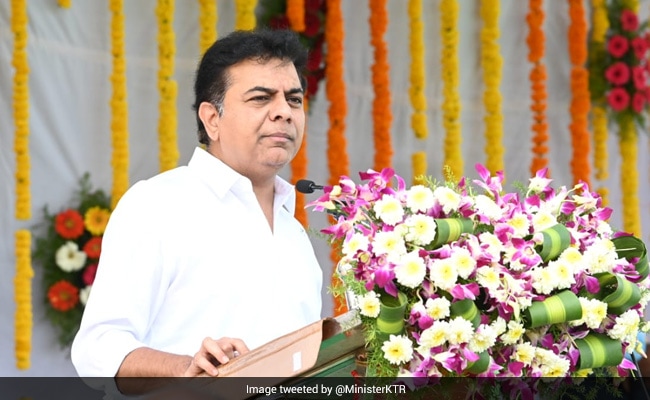 Telangana Bharatiya Janata Party (BJP) president Bandi Sanjay Kumar on Tuesday accused Telangana Rashtra Samithi (TRS) working president and state IT minister K T Rama Rao of using drugs and said he would prove it with tests if blood and hair samples of the minister are provided to him.

Addressing a gathering at Dimmadurthi village of Mamda Mandal in Nirmal district as part of his Praja Sangrama Yatra, the BJP state president reacted strongly to allegations by KTR, who is the son of Telangana chief minister K Chandrasekhar Rao that he had the habit of chewing tobacco.

"This Twitter Tillu says I chew tobacco. This is a blatant lie. In fact, it is KTR who is addicted to drugs. I am ready to offer any part of my body, including my blood samples for testing to prove that I don't consume tobacco. Does KTR have the guts to give his blood and hair samples for testing to prove that he doesn't consume drugs?" Mr Kumar asked.

The BJP leader also hit out at chief minister K Chandrasekhar Rao for abstaining from the prestigious meeting of heads of all political parties and chief ministers to seek their views on India being elected as head of the G-20 nations.

"What made him avoid the meeting except for petty political reasons?" Mr Kumar asked.

Mr Kumar, who earlier paid floral tributes to BR Ambedkar on the occasion of his death anniversary, demanded that the Telangana government should celebrate Ambedkar's birthday in April for at least one week.

"It is unfortunate that the TRS would not dedicate even an hour for the birth and death anniversaries of Ambedkar. Chief Minister K Chandrasekhar Rao doesn't even come out of his house on these days, while the BJP was ruling the state with the true spirit of Ambedkar's ideals," he said.

The BJP leader pointed out it was only after Narendra Modi became the Prime Minister that the poor and the downtrodden people in the country were able to get justice.

"The credit of making Ram Nath Kovind, a Dalit leader, as the President of India and the installation of the Ambedkar statue in Parliament goes to Modi," he said.

He further pointed out that PM Modi had inducted as many as 12 Dalit MPs into the Union cabinet and appointed several SCs as governors and chief ministers.

"Every year, more than 1.20 lakh Dalit youth are being transformed into entrepreneurs, thanks to the Modi government," the BJP leader claimed.