A teary 60-year-old Ms Fakhroo says she has been left with nowhere to go after her house was demolished. 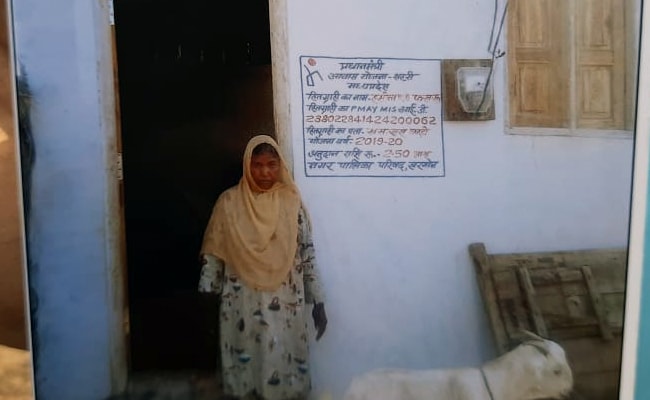 "The officials covered the PMAY poster with cow dung before demolishing my house," Hasina Fakhroo said.

The aftermath of clashes in Madhya Pradesh's Khargone last Sunday has left many families in dire straits as the administration acted swiftly, even rolling in bulldozers to demolish houses of people suspected to be involved in violence. A gazette notification for setting up a two-member claims tribunal to recover damages from those involved in communal violence has also been issued.

Hasina Fakhroo, a resident of the Khaskhaswadi area, whose house was one of the many demolished by the district administration a day after the clashes, says it was constructed under the Pradhan Mantri Awas Yojana (PMAY) scheme.

She claims she received notices to vacate the premises last year and again on April 7 informing her that the land upon which the house was built was encroached upon.

"As the encroachment by you has been proven, the court has ordered to demolish the illegal construction upon the land," the notice said.

A teary 60-year-old Ms Fakhroo says she has been left with nowhere to go after her house was demolished. "We got Rs 2.5 lakh from the government and saved another Rs 1 lakh to get the house constructed, the officials covered the PMAY poster with cow dung before demolishing my house...I have nowhere to go now, they should have killed us," she told NDTV.

Her son Amjad claims that they didn't even get the time to take out their belongings before the demolition. He also tried to unsuccessfully approach the courts. "I rushed to the district court with all the documents, but it was not possible to get any relief from the courts as everything was closed on Saturday and Sunday. On Monday, they came with the bulldozers and demolished our house. They did not even give us any time to take out our belongings," he narrated.

The district administration set out on a spree of demolition razing down 16 houses and 29 shops citing involvement in the clashes. According to the official sources, all the demolished establishments are minority-owned.

Many have accused the state of unfairly targeting Muslim houses on mere suspicion and without a fair hearing. However, the district administration claims that they have demolished only the illegal buildings. Collector Anugraha P said, "These names were already on the list of people who have built establishments by encroaching on the government lands and coincidentally many of them were involved in the riots. The demolition drive is completely legal, everyone was given prior notice."

When questioned specifically about Hasina Fakhroo, she said, "She was allocated money to build a house at a different plot, but had constructed it on government land worth Rs 2 crore. We have only removed encroachment from government land."

Khargone remains tense as the administration's bulldozers have razed more than 52 constructions after the clashes. Senior police officials are camping in the town to review the situation. Around 100 people have been arrested so far and 89 of them have been sent to jail.