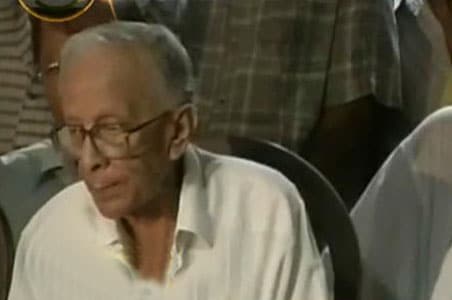 New Delhi: NDTV takes a look at some of the key moments of Marxist patriarch Jyoti Basu's life.

1977: Sworn in as chief minister of West Bengal

Walk The Talk quote: Advani, I know. V P Singh sent me to him before the break-up of the government saying please prevent him from this rath yatra. I went to his house, I sat there, argued with him. He would not agree. And again, he's started this rath yatra. And thousands were killed at that time. What they're doing is certainly barbarian.

1996: Becomes chief minister of West Bengal for the fifth time

Walk The Talk quote: ''Congress itself agreed that it will support the United Front from outside. So we accepted it. Only in my party, there was division.''

Walk The Talk quote: I still think it was a historic blunder. Why historic? Because such an opportunity does not come. History does not give such opportunity. Knowing who I am - a Marxist, a Communist, in the party here, for so many years I've been in politics, they invited me because they had no other prime minister in view. So we thought that even if we last for one year in that coalition with myself as the prime minister and our party joining it, then people would understand backward sections of the people. In many places, they don't even know us. What we are all about.''

Walk The Talk quote: When she first joined politics, I said I had known her from earlier times when Rajiv was there. I had dinner, lunch and all that with them and she was a housewife. But housewives also (laughs) have the right to come into politics.''

Kolkata quote: Every individual has a role to play and I think the role that I have been asked to play, I have played efficiently. That has been recognised by the party, and I am happy about it.

Promoted
Listen to the latest songs, only on JioSaavn.com
2008: Basu says Subhash Chakraborty needs to be made a member of the Central Committee and then apologises for breaking party discipline

Over 900 Deaths Due To Accidents Caused By Cattle In Haryana In 5 Years: Report