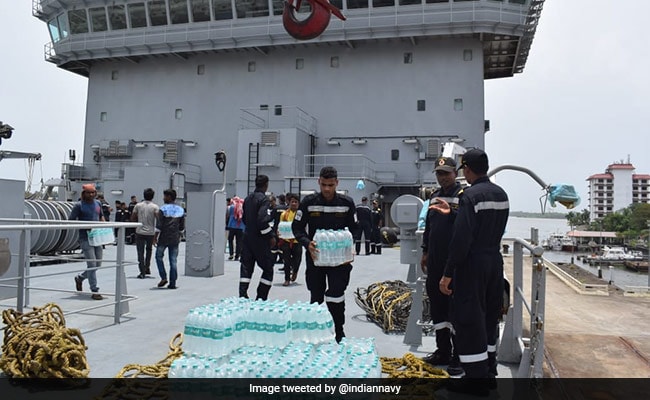 As Kerala reels under the impact of the devastating floods, the Western Naval Command on Sunday sailed Indian Naval Ship (INS) Mysore with relief material to provide assistance to the flood-hit state.

On the night of August 19, the ship carried about 70 tonnes of relief material which includes bottled water, ready to eat meals, fresh ration, milk, biscuits and other miscellaneous things like medicines, essential toiletries, phenyl, gash bags, bleaching powder, and candles. The relief material also included items received from some NGOs situated in Mumbai.

The ship also carried one Chetak helicopter for augmenting air effort of the Southern Naval Command. A second ship, INS Mumbai is also being prepared with relief material and would depart for Kochi by the morning of August 20.

Earlier on August 17, INS Deepak had sailed from Mumbai for Kochi with divers, Geminis, raincoats, gumboots, bottled water, fresh rations and ready to eat meals. The ship entered Kochi on Sunday and handed over relief stores. Over the next few days, the ship will stock up more fresh water and relief material from Karwar for a second round of replenishment at Kochi.

Yesterday, the National Crisis Management Committee (NCMC) directed the central ministries to focus on the provision of emergency supplies of food, water, medicines and restoration of essential services in the southern state.

NCMC met for the fourth time on Sunday in last four day to coordinate rescue and relief operations among the Defence Forces, National Disaster Response Force (NDRF), Ministry of Home Affairs (MHA) and other Central Ministries and Kerala Government.

Thousands of personnel of Indian Navy, Air Force, Army, NDRF and Central Armed Police Forces (CAPFs) are engaged in the rescue and relief operations, which is in full swing in Kerala.

Till now, 38,000 people have been rescued and evacuated from the flood-affected areas. Medical aid has been provided to more than 23,000 people and around 3,00,000 food packets have been supplied by the Food Processing Ministry.

Kerala has been facing the worst flooding in a century. Kerala Chief Minister confirmed on Saturday that the death toll due to the floods has increased to 357. He added that the state has suffered a loss of Rs 19,512 crore due to the deluge.