The Ahmedabad police reportedly arrested the accused from a flat in connection with the painting of graffiti on Metro coaches hours before PM Modi had inaugurated Phase-I of the Ahmedabad Metro on October 1. 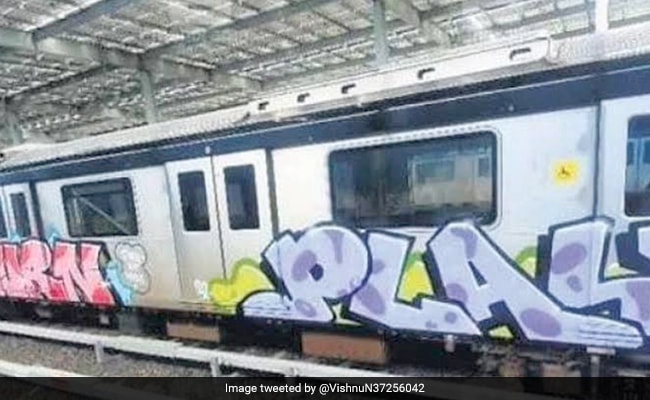 Kerala metro had graffiti including the words like "BURN" and "SPLASH. (File)

Kerala police will interrogate the four Italians, who had been arrested by the Ahmedabad Police in connection with painting graffiti on Metro train coaches, to confirm whether the same gang was behind the defacing of the Kochi Metro coaches some months ago.

A four-member police team including the station house officer (SHO) of the Metro Police station here, would soon travel to Ahmedabad to interrogate the gang, who were believed to be members of the international group "Rail Goons", notorious for painting graffiti on public property and vehicles.

However, a police officer here said there is no confirmation so far whether the same men were behind the spraying of graffiti including the words like "BURN" and "SPLASH." "The police team from the state will soon start to Ahmedabad. There were media reports that the four Italians, arrested there, were behind the defacing of the Kochi Metro also some months back. But, it can be confirmed only after our interrogation," the official told PTI.

If their involvement is confirmed after questioning, their arrest would be recorded, he added.

"We have suspicion about the involvement of the Rail Goons since the beginning after examining the video graphics of their earlier graffiti. It was an international group comprising nationals of various countries," the official added.

The Ahmedabad police reportedly arrested the accused from a flat in connection with the painting of graffiti on Metro coaches at Apparel Park hours before Prime Minister Narendra Modi had inaugurated Phase-I of the Ahmedabad Metro Rail Project on October 1.