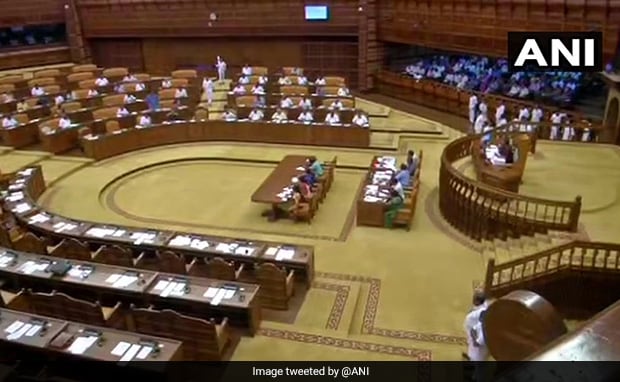 The MLAs had climbed on to the Speaker's dais.

Four Congress MLAs were censured by Kerala Assembly Speaker P Sreeramakrishnan on Thursday for climbing on to his dais and raising slogans, violating rules and lowering the dignity of the house as the Opposition boycotted proceedings for a second consecutive day.

When the House assembled this morning, the Opposition stuck to its demand for suspending the police officials, who had hit the MLA and KSU activists resulting in injuries before a probe, which was not accepted.

The opposition wanted Chief Minister Pinarayi Vijayan to respond to its demand. The opposition members once again trooped in to the house after question hour, when the Speaker read out his order
censuring the MLAs.

In his ruling, the speaker said some unfortunate events occurred in the House on Wednesday.

"A few members of the Opposition on Wednesday climbed on the dais of the Speaker even as the Opposition leader was speaking. They disrupted the Assembly proceedings and the House was temporarily adjourned... Earlier also, when there were such instances of violation of code of conduct inside the Legislature, the Chair had taken action...," he said.

Protests and healthy discussions were welcome, but the  Chair has the responsibility to check the practices that go against the rules and regulations and procedures of the House, he added.

Describing the Speaker's action as "unilateral", Leader of the Opposition Ramesh Chennithala alleged they had not been taken into confidence before it was taken.

"The Speaker had assured us at the all-party meet that the decision on disciplinary action would be taken only after consulting with the Opposition. But he failed to do so," he alleged.

The opposition then walked out of the house for the second time.

After rushing through the business, the Speaker adjourned the house sine die.

Since Wednesday, the House has been witnessing protests by UDF MLAs against the police lathicharge on KSU activists who were taking out a march to the Assembly demanding an independent probe into Kerala University's alleged marks scam and a CBI probe into suspicious death of two minor sisters at Walayar.

Industries minister E P Jayarajan had on Wednesday said action would be taken against police personnel only after a probe.

A case had been registered against 20-odd KSU activists.

The Home department has asked the Additional Chief Secretary to probe into the violent incidents, he said.