"Will Remain Secular Party": KCR Rules Out Alliance With BJP

He rubbished allegations by opposition Congress that he had entered into a secret understanding with the BJP. 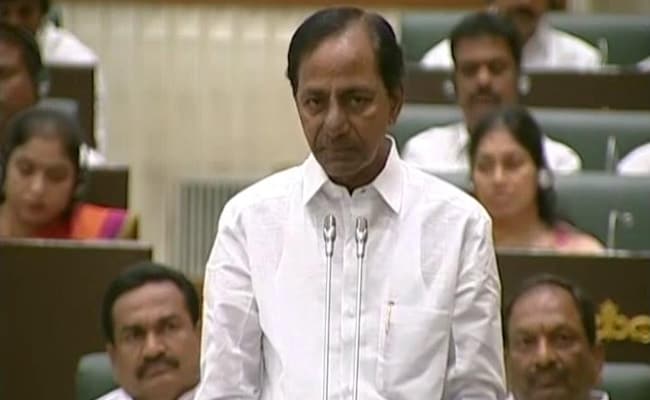 He rubbished allegations by opposition Congress that he had entered into a secret understanding with the BJP.

He reiterated that both the Congress and the BJP had "miserably failed" and that a qualitative change in politics is required to ensure the country's rapid growth.

Mr Rao, however, defended his meetings with Prime Minister Narendra Modi, saying he would meet him to discuss issues related to the state.

KCR, as the TRS chief is known, met PM Modi early this month. His second meeting with PM Modi in less than two months triggered speculations of an alliance with the BJP for the elections to the Assembly and the Lok Sabha.

The Chief Minister told a news conference that the TRS will go it alone in the elections and announce its candidates next month.

Asked if he is going for early Assembly polls, the TRS leader said the party were ready for any eventuality.

"It can''t be called early polls as the Election Commission of India can hold elections any time six months before the end of the house term," he said.

He was briefing on the decisions taken at a meeting of TRS Executive, which set off speculations of polls being advanced.

KCR also made it clear that he still stands by his plans to form a non-Congress and non-BJP federal front for the Lok Sabha elections.

"The federal front may take a little time but it will become a reality. I am not in a hurry," he said.

The TRS Executive passed nine resolutions, which will be sent to the Prime Minister, urging him to fulfil commitments made to Telangana during the bifurcation of undivided Andhra Pradesh.

The TRS chief also slammed Congress President Rahul Gandhi for what he called "uttering lies" while addressing meetings in Hyderabad earlier in the day. He advised Mr Gandhi to grow up by checking the facts.

On Mr Gandhi's remark that there is one-family rule in Telangana, the Chief Minister said that it is better than the Gandhi family.

He alleged that the Gandhi family want to keep others as their slaves. "People are not ready to let go their freedom and self-respect," he said.

He exuded confidence that the TRS will win over 100 seats in 119-member Assembly.