Cold Wave in Kashmir: The meteorological office said a Western Disturbance is most likely to affect the union territory for a few days from January 22. 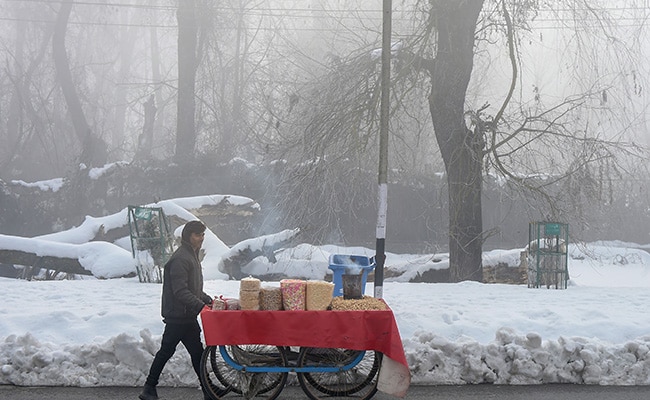 Kashmir valley is reeling under an intense cold wave since the heavy snowfall earlier this month.

There was a slight improvement in the minimum temperature at most places in Kashmir on Sunday, but there was little respite from the cold wave as mercury remained several degrees below the freezing point across the valley.

Meanwhile, the meteorological office said a Western Disturbance is most likely to affect the union territory for a few days from January 22.

Kashmir valley is reeling under an intense cold wave since the heavy snowfall earlier this month. The intense cold has resulted in the freezing of water supply lines and water bodies in several areas, including the Dal Lake.

The night temperature continues to settle several degrees below the freezing point, but there was some improvement across the valley, barring the ski-resort of Gulmarg, Sunday night, an official said.

The minimum temperature at the resort, in north Kashmir's Baramulla district, settled at minus 6.0 degrees Celsius last night, down from minus 4.2 degrees Celsius the night earlier.

Srinagar city, the summer capital of Jammu and Kashmir, recorded a low of minus 6.4 degrees Celsius, up from minus 7.6 degrees Celsius the previous night, the official said.

The minimum temperature in the city on Sunday night was still over four degrees below the normal for this time of the year, he said.

Pahalgam tourist resort, which also serves as a base camp for the annual Amarnath yatra in south Kashmir, recorded a low of minus 6.8 degrees Celsius, up from the previous night's minus 8.7 degrees Celsius.

Qazigund, the gateway town to the valley, recorded a minimum of 8.3 degrees Celsius and was the coldest recorded place in Jammu and Kashmir, the official said.

Several water bodies, including the surface of the famous Dal Lake, have frozen due to cold, prompting authorities to issue and advisory against walking on the ice.

The plunge in the minimum temperature has caused problems for the residents as it has also resulted in the freezing of water supply pipes.

A thick layer of ice has frozen over several roads in the city and elsewhere in the valley, making it difficult for motorists to drive.

Kashmir is currently under the grip of ''Chillai-Kalan'' -- the 40-day harshest winter period when a cold wave grips the region and the temperature drops considerably leading to the freezing of water bodies including the famous Dal Lake as well as the water supply lines in several parts of the valley.

The chances of snowfall are the most frequent and maximum during this period and most areas, especially in the higher reaches, receive heavy snowfall.

The metrorological office has said a fresh Western Disturbance is most likely to affect J-K during January 22 evening to 25 forenoon.

"Due to this, widespread moderate snowfall in Kashmir, hilly areas of Jammu and some parts of Kargil district especially Minamarg, Drass and Zanskar and rains in plains of Jammu region are likely to occur, with the main activity on 23-24. This may affect surface and air transportation. ," the official said.