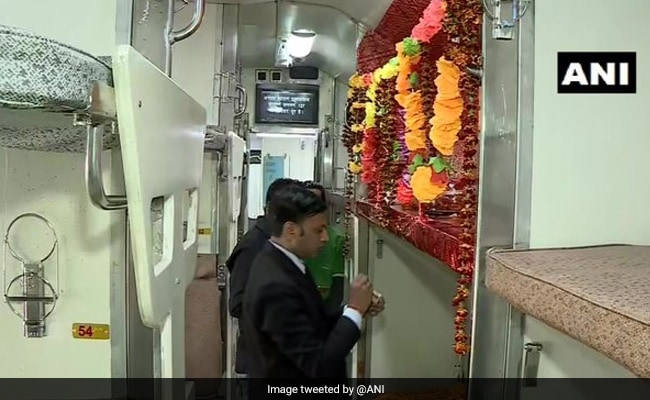 After sharp reactions to a "mini-temple" for Lord Shiva on a new train launched by Prime Minister Narendra Modi on Sunday, the railways today said any "prayers" offered to idols on the Kashi-Mahakal Express were only a one-time affair.

Reports said seat number 64 of coach B5 on the Kashi-Mahakal Express that connects three Jyotirlingas (or god Shiva relics) in two states, had been turned into a temple devoted to Lord Shiva.

"There is going to be no such reserved or dedicated berth for this purpose in the commercial run of the train," news agency ANI quoted the Indian Railways Catering and Tourism Corporation (IRCTC) as saying on Monday.

Images showed an upper berth converted into a shrine with staff praying before it. The seat would be left vacant for the deity, railway spokesperson Deepak Kumar was quoted by the Press Trust of India as saying.

"Staff of the new Kashi Mahakal Express train had temporarily put photos of Shri Mahakaal on an upper berth to do 'pooja' and seek blessings for the success of the new project. It is meant only for the inaugural run as a one-time affair," the IRCTC was quoted as saying.

The train was flagged off by Prime Minister Narendra Modi on Sunday from the Varanasi junction and it will start commercial operations from Thursday.

Responding to reports of a "seat reserved for Lord Shiva", AIMIM leader Asaduddin Owaisi posted an image of the preamble of the constitution tagging the Prime Minister's Office.