He Was "Mentally Upset": Mother Of Man Who Killed Kasauli Officer 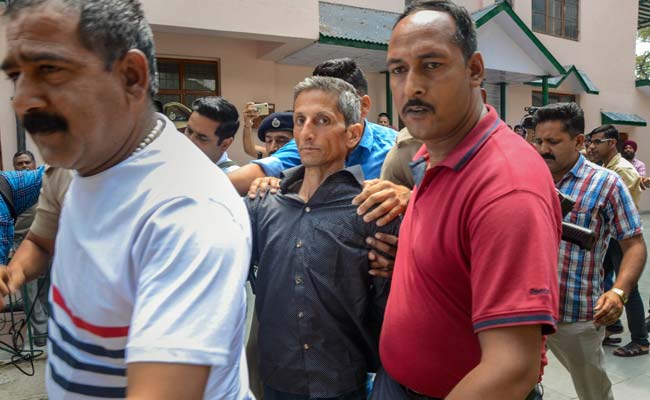 Kasauli: Narayani Devi, whose son is accused of killing a woman officer leading a demolition drive against illegal construction, began her day early today, digging deep into the rubble of the guesthouse named after her to try and salvage what she could.

The slender elderly woman, dressed in a salwar kameez and wearing slippers, rifled through the debris of plywood, brick and mortar, picking up pieces of her life as it were, stopping occasionally to tell those engaged in bringing down the floors to be careful.

Narayani Devi had earlier said her son had lost his mental balance as he couldn't see their guesthouse being demolished.

Thakur was arrested in Mathura yesterday in a joint operation by the police in Himachal Pradesh and Delhi.

He allegedly fired and killed Sharma, who was leading a demolition drive against illegal construction and had reached the Narayani Guest House in Kasauli, on Tuesday.

"He had spent a lot of money on the guest house. He even borrowed money to expand it. He was spending money on lawyers' fees after the case was going on. He was mentally upset for past 2-3 months and was on medication for this," Narayani said.

When her son was brought to the site under heavy police escort late afternoon, her eyes turned moist.

"I still don't think that he could have shot anyone," she kept saying. 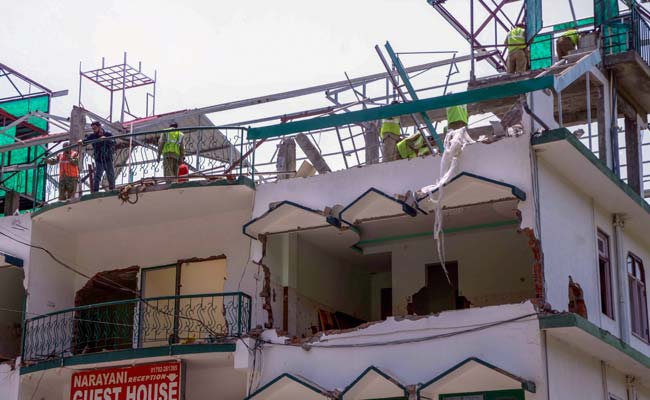 Supreme court had ordered demolition work of two of the four floors of the Narayani guesthouse. (PTI)

The accused's children and wife restricted themselves inside a portion of the guest house where they live as demolition continued.

Narayani said that Thakur's children were under acute stress and did not attend school for few days.

Most of those who live in the neighbourhood where the shooting incident took place described Vijay Singh, a government employee, as a man who kept low-profile and helped his mother run the guest house.

"We were shocked when we heard that Vijay Singh had killed a lady officer. He is an educated person who was also known for his good writing skills. He would take a bus to Shimla from Dharampur to reach his office and was polite and courteous with everyone," said a local who owns a juice shop.

The Supreme Court had on April 17 ordered the state government to demolish unauthorised structures in several hotels and guesthouses in Kasauli and Dharampur areas of Solan district. Four teams were constituted by the authorities to carry out the work.

Yesterday, the Supreme Court said the "unfortunate death" of the woman government official was the result of "non-implementation of the law".

Seeking the status of investigation in the case, it directed the Himachal Pradesh government to apprise it about the steps taken to ensure that no unauthorised constructions were carried out in the entire state.

It also asked the state to inform it about the status of implementation of the order regarding demolition of unauthorised constructions in 13 hotels at Kasauli.

Today, teams from different government departments, including Revenue, PWD, Electricity Department, Forests and Irrigation and Public Health, were engaged in the task of bringing down illegal structures with police personnel being deployed outside each building.

Several hotel and guesthouse owners said they have decided to bring down unauthorised constructions on their premises.

Aman, the manager of Hotel Whispering Winds, told PTI that they had decided to voluntarily demolish a portion of the hotel.

Giving details, officials said unauthorised construction in four hotels and guest houses in Sanawar in the area had been demolished.

A hotel on the Dharampur-Kasauli road had allegedly built several rooms without permission and most of the structure was being brought down.

According to norms, only three storeys plus one for parking is admissible, but several hotels have openly violated the norms by constructing four to eight storeys.

He alleged that the crime graph had gone up since the BJP came to power in December last year.

Hitting out at opposition parties, Chief Minister Jai Ram Thakur said the opposition should refrain from politicising the Kasauli incident. Unauthorised constructions in the area were old, he said, taking a potshot at rival Congress, which earlier ruled the state.
Comments
kasauli demolition driveNarayani Guest House